Unknown (always on the move from planets to planets)

Abducting and experimenting on people

Get all gold and kill all the people (all failed).

Symbolic Alien Extortionists
Demons" is the name given by the townspeople of Absolution, New Mexico to the main antagonists of the 2011 sci-fi/western graphic novel Cowboys & Aliens (from which the movie was loosely based off of).

While initially appearing to be some kind of advanced invading force, and truly their technology is centuries beyond anything modern or 19th century Earth could muster, the "Demons" are anything but a military force invading our world:

The "Demons" are revealed to be little more than lowly space pirates, though very advanced by our standards, who value our gold and wish to exterminate humanity to take it—mimicking the "Manifest Destiny" policies of the American government at the time. While very physically powerful and armed with advanced weapons like space fighters and directed-energy weapons, the pirates are hardly invulnerable: guns, knives and fists can injure and kill them.

They first appear when they begin attacking Absolution and abduct a number of townspeople, including Sheriff Taggart, Percy Dolarhyde, and Maria. Jake Lonergan, the film's protagonist, shoots down one of the aliens' flyers, and the craft's occupant is heard attacking people inside one of the houses before fleeing, though not before Nat Colorado is able to wound it, allowing him and others to track it by puddles of its blood left behind.

One of the aliens next appears when Emmett Taggart goes to look for a stray dog, only to be confronted by the alien, who begins to feel him. Meacham, the town preacher, arrives and fires his gun at the alien, who turns and attacks him, fatally wounding him. Jake enters the room and tries to fire at the alien, who escapes.

Later on, the aliens appear as the group flees on horseback. One of the flyers snatches Ella off her horse, and Jake rides alongside the craft before jumping from his own horse and landing on the craft. He uses his weapon to fire into the craft, causing it to crash-land into a lake. Moments after Jake and Ella make it to shore, an alien emerges and violently strikes Ella before Jake kills it with his wrist weapon.

Later, Jake, with the help of Apache Indians, recovers his memories and learns where the aliens are located, so the main characters, accompanied by the Apaches, head to the location. Jake seemingly abandons the group, only to later return with his former gang of criminals. The humans then stage an assault on the outside of the aliens' ship, causing a bunch of aliens to come out and beginning attacking. The aliens are killed by the human army.

As the battle rages on, Jake and Ella venture inside the aliens' ship, where they find the captives, free them, and get them to leave the ship. Jake then follows Ella to the ship's power core, and she successfully gets Jake's wrist weapon off of him and re-configures it into a bomb which she then takes into the core on a suicide mission while Jake flees from aliens who begin shooting at him.

Jake makes his way into the aliens' lab inside which he was held earlier, and is confronted by the alien who murdered his lover Alice. The alien overpowers Jake, restrains him on the operating table and prepares to cut into him until Woodrow Dolarhyde comes in and fires at it, causing it to turn and advance on him. This allows Jake to get free and fire multiple times at the alien, wounding it and causing it to fall into a stream of liquid gold being extracted by the aliens' ship, dying in the process.

Jake and Dolarhyde then escape from the ship before it takes off. Moments after it takes flight, the reconfigured wrist weapon detonates, causing the ship to explode, killing all the aliens aboard. 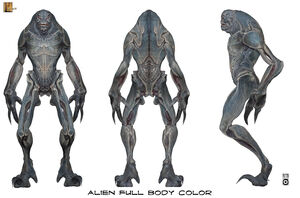 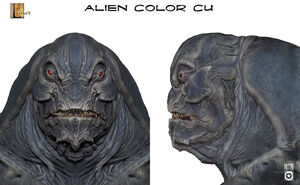 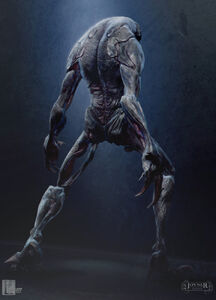 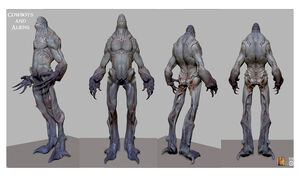 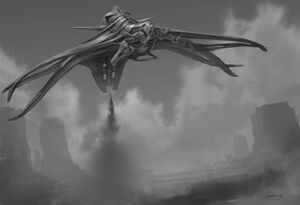 Retrieved from "https://villains.fandom.com/wiki/Demons_(Cowboys_%26_Aliens)?oldid=4144918"
Community content is available under CC-BY-SA unless otherwise noted.