Folklore and myths around the Earth's globe

Could be hailing from anywhere but primarily from Hell

Having "fun" with humanity (their idea of fun is definitely different from humans').

Each species of demons have their own objectives to pursue but none are good for humanity or heaven.

Demons, also known as Devils or Fiends, are very common antagonists in a number of theological stories, mythologies, folklore, and fiction. They are considered either Fallen Angels, Unclean Spirits or degenerated Lesser Gods. Although the word now has an attachment to malevolence it was originally a positive term for any spirit lesser than a deity in status but higher than humans.

Demons have confronted a number of significant figures in religions from across the world such as the Hindu gods, Buddha, Jesus Christ and God. Normally, it is believed that only faith can overcome these creatures, and they are attributed with a number of evil powers.

Outwith religion demons are seen as metaphors for natural disasters, affliction and cruelty, the most prominent of which are the "deadly sins" of Christian tradition. Demons are also used to describe inner-fears and anxieties found in the minds of all people, which is where the common expression "face one's demons" comes from.

Demons are similar to monsters in being frightening and against the natural order. Unlike monsters however, most demons are seen as a spiritual threat rather than a physical one and can possess humans, cause poltergeist activity, drive people insane, and much more.

Demons in the Bible are otherwise known as fallen angels.

They are led by their ruler Satan to oppose God's will on Earth by warring against His angels and followers. Their numerous offenses include influencing/possessing human beings into doing their evil works, spreading false doctrine and lies and producing the Nephilim, a monstrous race of giants. Those directly responsible for creating the Nephilim were imprisoned in Tartarus whilst others appeared to roam free. God eventually condemns to the Lake of Fire, along with their ruler. Examples of demons in the Bible include Legion and Beelzebub.

Demons in Islam are known as Shayatin. Shayatin are led by Iblis to corrupt as much of humanity from God's path as possible, trying to corrupt humans into immorality. Both humans as well as Jinn can become Shayatin. Some Jinn don't do evil and mischief and worship God like humans do and are not considered as demons. Further the offspring of Iblis are sayed to be born as Shayatin and always evil. The Jinn on the other hand can be good and avoid hell, but the evil ones among them, will be sent to hell along with the evil humans due to their evil, for eternity.

Iblis is a Shaitan who is the Islamic counterpart to Satan. Iblis is an evil Shaitan who tries to corrupt people into evil. But, the good, obedient people refuse the temptation of Iblis. Iblis will eventually be sent to hell along with the evil people who follow his temptations.

Demons in Greek are referred to Daemons and also refers to the Greek gods sometimes due to their more questionable actions.

Japanese Mythology is full of spirits, some of which are considered malevolent in regards to mortals. Unlike Western mythology, Japanese spirits are not really good or evil, and are rather bizarre and often alien creatures whose methods and goals are often beyond the understanding of humans. Some of the more prominent demons in Japanese Mythology are the Onis and Tengus.

The Fomorians from Celtic Mythology are often envisioned as evil spirits. Though they are technically titans, they share a lot in common with demons, however, in being ugly, malevolent, and residing in the ocean (which is often considered the home of evil spirits).

A Folk Devil is a common antagonist in folklore and myth, often envisioned as the classical satyr-like Devil of Christian lore (inspired by Pan of Greek mythology). A Folk Devil is often a trickster or tempter who is often tricked himself by a seemingly hapless would-be-victim.

Although Folk Devils tend to be defeated, their are some variations of the theme in which Folk Devils actually succeed in their plan. A Folk Devil can be seen, in many ways, as an extension of pagan beliefs in fairies and lesser-gods, which were gradually replaced by the "Devil" as Christianity spread across the world.

As Christianity spread, the old pagan beliefs were demonized, and their followers accused of being part of "Witchcraft Cults". In the minds of medieval scholars, the world was inhabited by evil-minded men and women who sold their souls to demons in exchange for power, and moral panics often broke out as communities believed they were under attack by these "witches", leading to terrible oppression (such as Witch-Hunts).

Prior to Christianity, many pagans believed in "fairies", who were lesser-gods or spirits of nature, as Christianity spread the idea that these lesser-gods and spirits were not in line with the strictly monothestic Abrahamic religions, and thus, the fairies were either declared to be angels, figments of the imagination, or evil spirits that existed to lead people astray. Like Baal and Pazuzu before them, the Fairies suffered a degeneration from lesser-gods and spirits to demons, though some particularly malevolent fairies (such as Redcaps) were always considered demons, even in pre-Christian societies (though they went by different names and appearances). 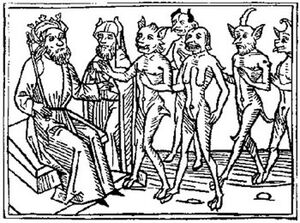 Retrieved from "https://villains.fandom.com/wiki/Demons_(theology)?oldid=4017667"
Community content is available under CC-BY-SA unless otherwise noted.