Destroying everything in their path.

Powerful Demons
The Demons Three is the name attributed to the demonic brothers Abnegazar,Rath and Ghast. The Demons Three ruled the galaxy a billion years ago before being banished by beings known as the Timeless Ones. Through the efforts of a sorcerer named Felix Faust, the brothers have come to Earth time and again, but they are almost always foiled by the super-hero team known as the Justice League of America. The power of the demons is bound to three mystical artifacts: the Green Bell of Uthool, the Silver Wheel of Nyorlath and the Red Jar of Calythos.

The Demons and Faust decide to use the Justice League of America to collect the items for them, and cast a spell which allows Faust to control each member with his fingers which have taken on the image of a JLA member they represent.

This happens when the JLA is busy battling the Lord of Time who is invading the present, each member of the Justice League disappear one by one during the fight until they are all brought before Felix Faust. This puts the JLA against the various guardians of the items to collect the item they seek. Taking the Jar, Bell and Wheel to Faust, however with the help of Martian Manhunter and Aquaman the group manages to defeat Faust and take the items into their possession.

Faust muses how the JLA may have saved their own time but they will never be able to stop his masters when they return in 100 years.

After succeeding in defeating Felix Faust, the Justice League continue their fight to stop the Lord of Time from taking over their era. However the Time Lord manages to escape to the distant future to take over the present day.

The heroes follow the Lord of Time to the year 3786 where they stop him before he can collect the weapons he needs. Trying to take him back to the present to face justice, the League soon finds themselves trapped in the year 2062, the year which the Demons are freed from their curse. They have used their magical powers to bar the League from returning to their own era, and takes them prisoner trapping them in magic bottles while they prepare to cast a Doomsday spell.

When they all attack the demons at their various locations to interrupt their spell, the spells don't work because they are being cast against the wrong Justice League members. Defeating all three demons, Green Lantern uses his power ring to trap them so that the only way they can be freed is through the Jar, Wheel and Bell.

Taking control of these costumes, they have them use a portion of their magic to bring costumes of Pied Piper, The Mask, Killer Moth, Dagon and Dr. Polaris to wreak the Justice League. When Batman, Aquaman, Flash, Green Lantern, and Wonder Woman fight these duplicates of their foes, their spare costumes are ruined, however the foes are defeated and turned over to the authorities who are shocked to find that there are now two of each criminal in their possession.

With all three teams seemingly defeated, Abnegazar and Rath do indeed battle to their mutual obliteration, and the super-heroes are able to combine forces to overcome the surviving Ghast, who is imprisoned by Dr. Fate in the reconstructed JLA satellite.

The Demons Three appear in the Justice League Unlimited episode "The Balance" with Abnegazar voiced by Wayne Knight while Rath and Ghast didn't speak. Wonder Woman and Hawkgirl abducted and asked Abnegazar for directions when searching for Felix Faust in Hades. 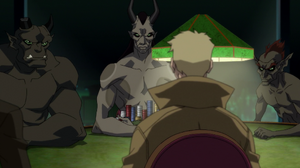