Invade Earth and wipe out the humans.

Demushu is a red Over Lord Inves who is one of the few survivors of the Femushinmu civilization and a major antagonist in Kamen Rider Gaim, serving as the main antagonist of the "Overlord" saga.

He was voiced by Tomokazu Sugita.

After being transformed into an Overlord Inves, Demushu massacred the weaker of his own kind alongside the other Overlords.

Demushu summoned several Elementary Inves to attack Baron, who was looking for him, giving him the opportunity to escape. Demushu and Baron eventually encountered each other again and fought, with the Overlord Inves easily overpowering the Rider. However, Kamen Rider Marika appears and distracts Demushu so he can escape.

Demushu later attacks Gaim, but was stopped by Redyue so that she can bind Kouta with the Helheim plants. Demushu later fights Kaito again, this time on much more equal footing. However, their battle is interrupted by both Gaim and Redyue, with the latter telling Demushu to retreat.

Demushu soon began looking for Kaito again, attacking several researchers along the way. He eventually comes into conflict with Zangetsu Shin and Gaim, but Rosyuo orders him to retreat and telepathically tortures the red Overlord until he obeys.

Demushu later has a rematch with Gaim and Zangetsu but Sigurd soon appears and challenges him instead. Demushu soon notices that a crack had opened and enters through it into Zawame City, which he begins to destroy upon his arrival. Gaim and Baron try to defeat him but ultimately fail. However, Kouta transforms into Gaim Kachidoki Arms and gains the upper hand in the fight. However, Marika and several Kurokage Troopers attempt to capture Demushu, giving the red Overlord the chance to turn the tide of the battle. Kouta then flees with Kaito.

Demushu then goes to a place with Helheim fruits and eats one, allowing him to assume an Evolved Form. Demushu easily defeats the Riders on Earth, with Duke leaving them. However, Kouta arrives and uses his Ultimate Form equipped with the Kiwami Arms to destroy Demushu.

Demushu was among the many villains in service to Shocker after their History Changing Machine rewrote the timeline so they achieved their goal of world dominion, with the Double Riders being killed by Kamen Rider 3. Though he manages to kill Kamen Rider Mach he is defeated by Gaim using his Orange Arms' Burai Kick. 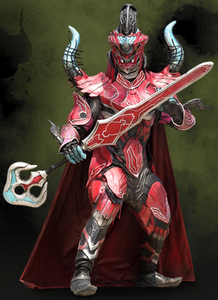 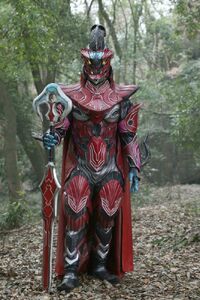 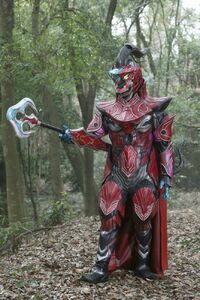 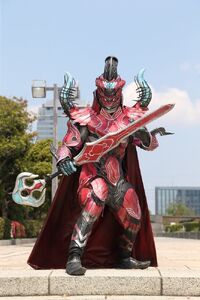 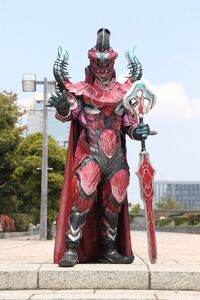