Fixing his hair.
Avoiding any kind of work or conflict.
Doing reconnaissance work.

Demyx, the Melodious Nocturne (in Japanese: 夜想のしらべ, Yasō no Shirabe, lit. Nocturnal Poem), is the ninth member of Organization XIII and a supporting antagonist in the Kingdom Hearts video game series.

He is a lazy and irresponsible member of the Organization who wields a sitar in battle, using it to manipulate water and command it in his favor. He is also the commander of the Dancer Nobodies. He later returns as a reserve member of real Organization XIII.

He is voiced by Kenichi Suzumura in Japanese and by Ryan O'Donohue in English.

According to Xemnas, Demyx's original self was a Keyblade wielder during the Age of Fairy Tales. At some point, this Keyblade wielder succumbed to darkness, spawning a Heartless. However, his will was strong enough to spawn a Nobody as well, who joined the Organization as Demyx.  In his own room at an unknown time, Demyx was fixing his hair in front of the mirror, which something he did when he was a human made him do. Finishing setting his hair, Demyx picked up his sitar and strummed it. He played and played, but was interrupted by Xaldin, who told him to keep it down because he wanted to sleep.

Annoyed, Xaldin questioned why Demyx clings to his human memories, but he did not reply. Xaldin told him that Nobodies need to sleep because a terrible force is moving their world and they need rest to store up power. Demyx did not reply once again as Xaldin left the room, displeased.

Demyx is present when Xion joined the Organization. Demyx sometimes accompanies Roxas on several missions, including battling a Flare Note in Olympus Coliseum and tackling a Dual Blade in Halloween Town. When Roxas approaches Demyx, he willingly admits that he "isn't cut out for combat" and would rather perform recon. When news broke that that the members stationed at Castle Oblivion were killed Demyx mentions to Roxas how things are nicer that they (moreso Larxene) are gone. He was later present with the remaining members when Xemnas reveals Kingdom Hearts and when Xemnas reveals Xion's true nature as replica much to his shock, he says "all this time I've been talking to a puppet" before vanishing.

Demyx appears in Hollow Bastion (formerly known as Radiant Garden) with all of the other Organization members, but he does not contact Sora. Demyx's nervous laugh is audible when the Organization laughs at Sora.

Demyx is sent after Sora on suggestion by Xigbar to find him and to keep Sora on the Organization's desires. He also contacts Hades, but no deal was made and Demyx promptly flees, while passing by Sora and his friends. Later on, Demyx steals the Olympus Stone, and soon encounters Sora within the Underworld once more. Although Sora doesn't understand the meaning of Demyx's objectives, nor why Demyx calls him Roxas, Demyx is unable to fulfill them and took the next ordered step, which is to attack Sora. He summons multiple water clones to attack Sora, but Sora manages to defeat them all.

Just afterwards, Demyx appears to Sora and explains the nature of the Absent Silhouettes.

Demyx confronts Sora later in Hollow Bastion during the Battle of 1000 Heartless, again greeting Sora in a rather friendly manner. However, Sora and his companions' response is hostile, even claiming that Demyx is unable to fight. Demyx tried to show some bravery by saying, "You shouldn't judge anyone by appearance.", but when Sora and friends took out their weapons, Demyx began to cower, claiming that Organization XIII sent the wrong guy. Sora and his friends then claimed that the Nobodies do not have hearts. Demyx's normal carefree attitude vanishes, and he silences them with a much darker tone and attacks the "traitor" again with all his strength. In the end, however, Demyx is defeated again and fatally wounded. After lamenting his loss, he fades into darkness.

Demyx returns in Kingdom Hearts III. Though he is originally brought back to join the real Organization XIII, he is quickly "benched" and replaced with one of Vexen's replicas. something that Larxene makes fun of him for. However, due to Demyx's past as a Keyblade wielder from the Age of Fairy Tales, the Organization is still keeping him as a reserve member. He mocks Larxene when she proposes another coup against Master Xehanort to Marluxia mocking her of her and Marluxia's failed attempt at Castle Oblivion and was annoyed when Luxord mocks him for being benched.

Later, Vexen tracks Demyx down in Radiant Garden and attempts to convince him to help him defeat the Organization as both of them were benched. While Demyx counters by claiming he and Vexen never knew each other and was reluctant to backstab the Organization despite his laziness. Vexen explains that this is exactly why Demyx is perfect for the role as well as offering him a chance of redemption. He is convinced to help him when Vexen reveals to him Saïx was involved with their plan and that he would be doing more reconnaissance as opposed to being benched. Vexen then has Demyx deliver a replica and Ansem the Wise to Ienzo, who uses the replica to resurrect Roxas.

In the Keyblade Graveyard, Demyx came to take the replica that was inhabited by Dark Riku. Riku at first was ready to fight him but Demyx shows Riku his gummiphone to proves his affiliations with Ienzo Overconfident, Riku told him that it was not just any vessel and that it had to be delivered to Radiant Garden safely as it contains important memories. As a result, Namine became whole. What happens to Demyx afterwards remains unknown but it's very likely he was recompleted as his original self as part of his redemption. 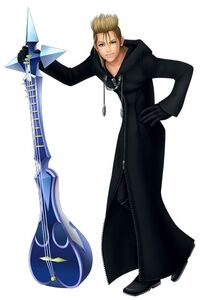 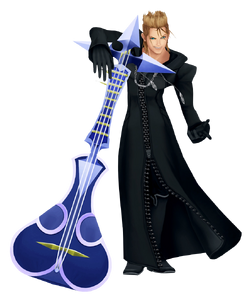 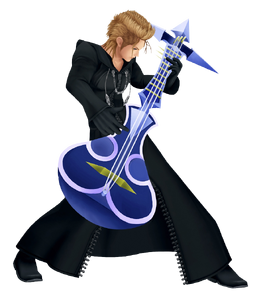 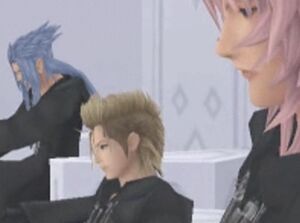 Demyx and the other members of Organization XIII meeting Xion for the first time. 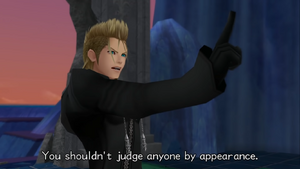 "You shouldn't judge anyone by appearance." 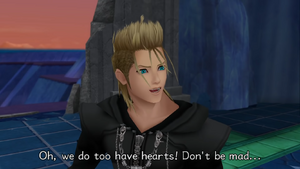 "Oh we do too have hearts don't be mad!" 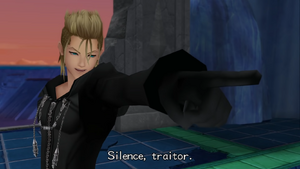 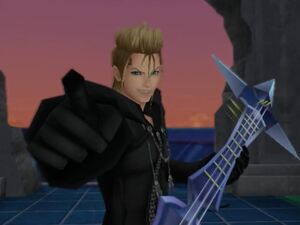 Demyx about to confront Sora, Donald and Goofy. 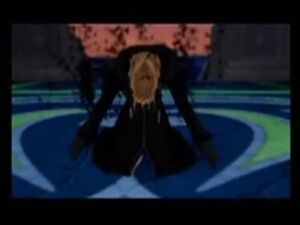 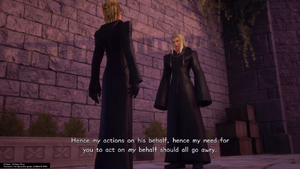 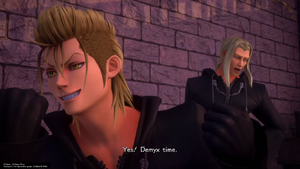 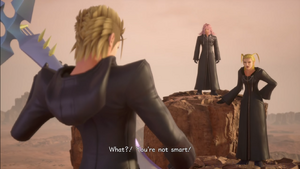 Demyx with Larxene and Marluxia at the Keyblade Graveyard. 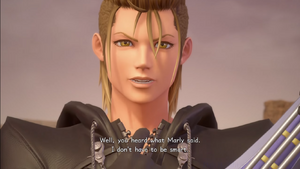 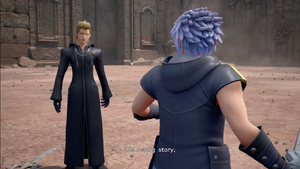 Demyx appears to Riku in the Keyblade Graveyard. 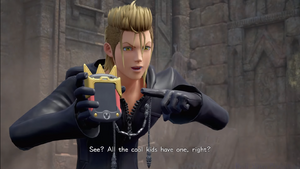 Demyx revealing to Riku his affiliation with Ienzo by holding his gummi-phone. 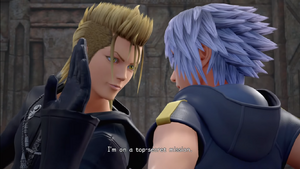 Demyx revealing his reasoning to Riku, he intends on taking Dark Riku's vessel to give to Ienzo for Naminé to use. 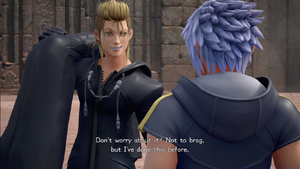 Demyx assuring Riku will take care of the vessel telling him he has done it before.