Track down and eliminate all targets.

Dengar is a recurring character in the Star Wars franchise, serving as a minor antagonist in the original trilogy, appearing in both The Empire Strikes Back and Return of the Jedi. He was also a recurring character in Star Wars: The Clone Wars, serving as a neutral antagonist. He's a Corellian bounty hunter who's been active since the early stages of the Clone Wars serving as a member of a syndicate of bounty hunters lead by Boba Fett. Dengar remained active following the war's end and served as a hired agent for the Galactic Empire during its reign over the galaxy before and during the Galactic Civil War.

Judging from one of his quotes "Ha ha ha ha! I can't believe I'm getting paid for this!", Dengar seems to be excited about battle. His self-esteem was high, especially with his flirting with different women. Watch out for him in battle: Dengar can rush in your direction to beat you with his blaster rifle!

Dengar was born on the planet of Corellia sometime prior to the Clone Wars during the last years of the Galactic Republic. During the war between the Republic and the Confederacy of Independent Systems, Dengar was a bounty hunter and became very active at the height of the conflict between the two sides. During the Clone Wars, Dengar and the rest of Boba Fett's syndicate were hired by Rigosso to help allow the safe passage of cargo on a subtram to the Belugan tyrant, Otua Blank on the planet. Prior to the mission however, Dengar was first introduced to Asajj Ventress after she was forced to join the syndicate to pay a debt she owed to the team for accidentally killing one of their members in a bar.

Dengar and the other hunters eventually boarded Bossk's ship, the Hound's Tooth, and headed off for Quarzite to deliver the package and get the credits that they were promised. They then boarded the subtram and guarded it along with a small security team of Belugan troops lead by Rigosso. Dengar went outside and talked with Ventress for a little bit attempting to hit it off with her before they were attacked by a large group of Kage Warriors attempting to steal the cargo. Dengar was able to defend himself and kill two of the Kage Warriors using stick grenades. Despite his best efforts however, Dengar was overwhelmed and was thrown off the train by the Kage Warriors and safely landed on the underground surface. He then regrouped with the other hunters and got the payment that they were promised, but Boba wasn't present and was told that he would see them later by Ventress before she left.

Working for the Hutts

During the war, Dengar was one of many bounty hunters that were hired in service of the Hutt clan alongside others such as Latts, Embo, and Sugi to act as protection on Nal Hutta. All of them were present when the renegade Sith lords Darth Maul and Savage Opress were present along with Pre Vizsla when they were negotiating with the Hutts to convince them to allow safe passage through their space in service of the Shadow Collective. Dengar and the other three hunters sprung up when negotiations went sour and engaged the Shadow Collective leaders after they turned violent and started attacking the Hutts and their enforcers. The Mandalorian leader used his flamethrower during the attack and forced the hunters back and they eventually fled the conflict zone after Death Watch reinforcements arrived. Though he was grizzled and weathered by years of service, Dengar continued to push onward and remained active in his bounty hunter services for the rest of the war. He was present at the time of the assault on Cymoon 1 and was present when Jabba the Hutt was negotiating with the Sith lord Darth Vader in his palace on Tatooine.

During their talks, Dengar was ordered out of the room by Jabba so that negotiations would commence. He then went out to a bar on Nar Shaddaa where he learned from a Gungan that Chewbacca was there and shocked the wookie as he and C-3PO were about to storm Grakkus the Hutt's palace. During the raid, he demanded that 3PO contact Han Solo and shocked him when the astromech droid tried to help Chewbacca, the latter of whom ended up fighting Dengar but was subdued by the bounty hunter. When he demanded Han Solo's location, Dengar was stunned by him and threatened to destroy everyone with a theromal detonator despite being outgunned by Solo's ship before Chewbacca threw him off board and saved everyone.

Service for the Empire

Dengar survived his encounter with Chewbacca and remained active during the time of the Galactic Civil War. He was one of the many bounty hunters along with Black Krrsantan, Zuckuss, Bebbox and IG-90 that were hired by Vader and was tasked with rescuing Doctor Chelli Lona Aphra after she was captured by the rebel alliance. He would later return again in service of the empire and was present on the Imperial flagship when Darth Vader was searching for a bounty hunter who would track down and locate Milennium Falcon. Dengar was on the ship along with other bounty hunters such as Boba Fett, Bossk, IG-88, 4-LOM, and Zuckuss, but lost to Boba Fett who was the one who was chosen to track down and locate Han Solo after escaping Imperial hands. A year later, Dengar was present at Jabba's Palace when Jedi Knight Luke Skywalker arrived and attempted to free Han Solo, Leia Organa, and Chewbacca.

Shortly after the Battle of Endor, Dengar got into a fight with a young bounty hunter named Mercurial Swift in a holoplex rooftop in Coronet City on Corellia. Dengar had offered guidance and had attempted to convince the young bounty hunter to join him in a bounty hunter alliance, but Mercurial refused saying that Dengar was old and ineffective. Dengar was quick to get the advantage and had his blaster pistol aimed at his opponent, but he was outdone when Mercurial pretended that Boba Fett was behind him and fled. The Corellian was spared however as Swift saw no need to kill someone who didn't have a bounty on their head. The two of them ended up going their separate ways, but not before warning Swift that times are changing and that things would be far different now that the New Republic is the dominate galactic government and that the New Republic was potentially putting bounties on other bounty hunters' heads. Dengar's prediction ended up becoming true after the New Republic began refusing the services of bounty hunters in the aftermath of terrorist attacks during Liberation Day.

In the days leading up to the Battle of Jakku, Dengar along with Embo and Rodian Jeeta ended up accepting work from Mercurial Swift and became members of his personal crew. Swift sought to collect the Black Sun boss Gyuti's bounty from the Zabrak Jas Emari, the niece hunter of Sugi, who Dengar used to work for in the past despite her hating him. Due to Sugi's hatred of Dengar, he became unpopular amongst the team, even by Swift. After learning that the Hutt crime lord, Niima took Jas captive, Dengar and his fellow bounty hunters traveled to the Inner Rim to the planet of Jakku in search of Niimas' temple to take Jas into custody. Jas however, escaped custody and wounded Swift before she ran into Embo and managed to convince him that she was a friend of her aunt Sugi, which allowed her to escape and use Seift's Corellian shuttle to flee from the bounty hunters.

As Jas returned and reunited with her friend Norra Wexley and the B1 Battle Droid, Mr. Bones at Niim'as temple. Dengar and the other hunters however, tracked Jas there and cornered both her and Niima with the latter having promised to provide Jas and Norra with Imperial uniforms, an Imperial shuttle, and clearance codes to enter the main Imperial base on Jakku out of gratitude for ferrying her back to her temple. Niima had initially refused to hand Jas over and grabbed Swift by the neck until Dengar held his blaster at the hutt and forced her to let go of Swift and she dropped him to the ground alive and well. While the hunters were preoccupied, both Norra and Bones escaped on the Imperial shuttle.

After Jas was taken captive, Dengar and the other hunters returned to Swift's shuttle where Swift wanted to depart for Nar Shaddaa to hand Jas over to Gyuti, but his departure was deplayed due to the outbreak of the Battle of Jakku. While Jeeta landed the ship in a canyon, Jas ended up tormenting Swift and Dengar ended up demanding that he tell them what his plan is. When an angered Swift struck Jas, Dengar ended up mocking him who had sustained a facial scar from one of Jas' horns. Despite the objections of Swift, Dengar stated that he was willing to listen to Jas' counter-offer and responded positively along with Embo when Jas said that the New Republic was hiring bounty hunters and was willing to pay a large reward in exchange for the capture of Imperial Grand Admiral Rae Sloane, the aledged mastermind behind the Liberation Day terrorist attack. After Dengar said that working for the New Republic wouldn't be exactly "cozy-making", Jas responded by saying that she would secure full pardons and share the money with Dengar and Embo. 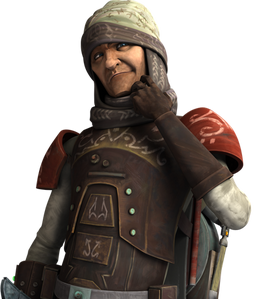 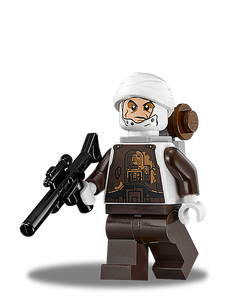 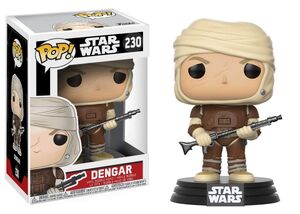 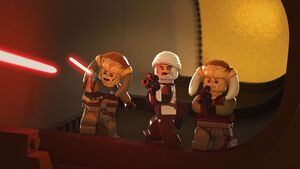 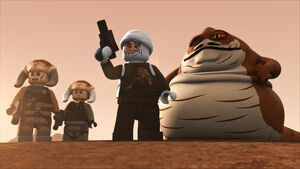 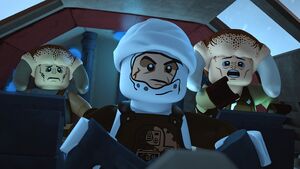 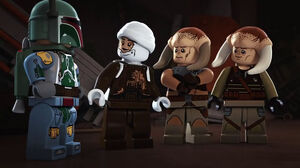