He was portrayed by Chris Morris.

Denholm was a controlling, serious, confident and arrogant man who deeply looked down upon his staff. He was also very ambitious and obsessed with "declaring war" on trivial matters such as stress, even saying he would fire anyone who was in any way stressed at all by the end of that day. He was also obsessed with fitness as he cycled to work every day for 70 miles and described his thighs as a red fire engine.

In May 2007, the police arrived and were going to question him about an irregularity with the pension fund upon hearing this he leapt from the window to his demise. He left behind an entire video commentary for his funeral. In 2008 after Douglas accidentally shot himself in the leg he collapsed and awoke in a limbo and Denholm appeared to him encouraging his son to join him, however infamous dictator Adolf Hitler peered from behind a pillar and Denholm quickly pushed him back, upon realising he was going to hell he left with Denholm vowing to him that he'll see him soon. 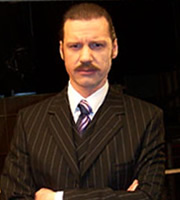 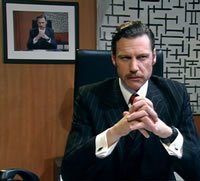 Add a photo to this gallery
Retrieved from "https://villains.fandom.com/wiki/Denholm_Reynholm?oldid=3871117"
Community content is available under CC-BY-SA unless otherwise noted.