NOTE: This article is not to be confused with the Janitor of the same name.

Dennis, also known as The Wolf, is a minor character in the top-down shooter video game Hotline Miami. He is a 50 Blessings operative who wears a wolf mask. He is unsuccessful in carrying out his orders and is killed by the Russian Mafia.

Dennis is a man with messy, medium-long dirty blonde hair. He wears a grey wolf mask, a purple tracksuit with light green stripes, and a pair of white and light green shoes.

Nothing is known about Dennis' past. When 50 Blessings takes a stand against "Russian oppression" in America by using cryptic and threatening phone calls to coerce people into killing members of the Russian Mafia, Dennis is one of the many people in Miami who start receiving these phone calls. Implied to be experienced enough in combat for 50 Blessings to target him, Dennis complies with the messages left on his answering machine, which order him to kill members of the Russian Mafia.

However, on May 5th, 1989, Dennis finds himself unsuccessful in carrying out 50 Blessings' orders when he enters a confrontation with a group of armed Russian gangsters. Cornered by the mobsters outside a convenience store, Dennis gets bludgeoned to death by the Russians, who leave his bloodied body behind. Jacket seemingly witnesses the events of Dennis' death occurring while conversing with Nicke, but ignores it. Whether or not the events of Dennis' death is a figment of Jacket's imagination in his coma is unknown. On May 11th, 1989, Jacket possibly acquires Dennis' wolf mask, which gives Jacket a knife at the start of a level when worn. 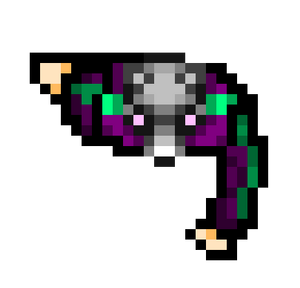 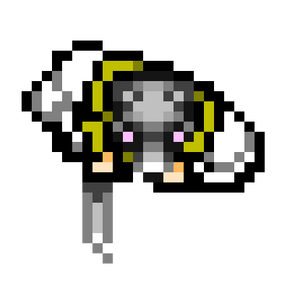 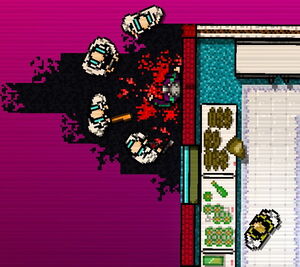 Dennis getting cornered and beaten by Russian mobsters outside a convenience store. 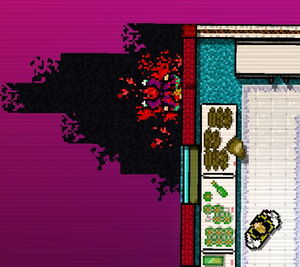 Dennis' bloodied corpse after the Russian mobsters beat him to death.