Riding his motorbike.
Shining up his boots
Killing anyone whom he is hired to kill.

Kill SpongeBob and Patrick to prevent them from bringing the crown to King Neptune (failed).

He is a murderous fish bounty hunter who was hired by Plankton to kill SpongeBob and Patrick and prevent the two from finding King Neptune's crown, which was taken by the Cyclops to Shell City.

He was voiced by Alec Baldwin, who also played Fred Frenger Junior in Miami Blues, Jed Hill in Malice, Nick Kudrow in Mercury Rising, Mark Cordell in The Juror, Donald Trump in Saturday Night Live, Makunga in Madagascar: Escape 2 Africa, Kennebrew Beauregard in BlackKk Klansman, Blake in Glengarry Glen Ross, and Larry Quinn in The Cat in the Hat. In the video game, he was voiced by Fred Tatasciore, who also played The Mawgu.

Dennis was an assassin who was hired by Plankton to kill SpongeBob SquarePants and Patrick Star, making his first appearance when Plankton told his computer wife Karen about having someone who would kill the heroes. The reason being that Plankton stole King Neptune's crown sold it to a forbidden land called Shell City and framed Eugene H. Krabs for the crime, so Neptune threatened to execute Mr. Krabs (via burning by fire) unless the crown was to be retrieved within a period of six days; Plankton, obviously, wanted Krabs to die of a painful and wrongful execution, and upon learning SpongeBob's and Patrick's journey to get the crown back, he knew that Neptune would discover that Plankton was the thief, so he sent Dennis after them.

Dennis first appears in the film after SpongeBob and Patrick left on a mission to bring the crown back to King Neptune, he inspects left behind sesame seeds from the Patty Wagon and the two gasoline workers insult his hat. Annoyed by this, he literally pulls their mouths off before resuming his search for SpongeBob and Patrick. He then follows the duo's trail to the Thug Tug, where he finds that SpongeBob and Patrick blew some bubbles before causing a fight. As he blows a bubble to verify that Spongebob and Patrick were there, Dennis meets up with Victor and his thugs, who threaten him for blowing a bubble, but Dennis just punches Victor into the Thug Tug, sinking it before leaving to find his targets.

Later in the film, SpongeBob and Patrick encountered Dennis for the first time during the middle of their journey. Dennis removes Spongebob and Patrick's mustaches that were used to become "men" (which are made of sea grass and given by Princess Mindy) from their faces, calling the duo out on their stupidity on the obviously fake mustaches, before advancing on them. When SpongeBob asks why Dennis wants to kill him and Patrick, Dennis explains Plankton hired him to do so, and in his overconfidence, he accidentally reveals to his victims that Plankton was the one who stole the crown and sent it to Shell City. Dennis then lifts up his foot to crush the duo with his "big" spike boot, only to be crushed by the Cyclops' "bigger boot".

After what has happened at Shell City, SpongeBob and Patrick escape and ride on the backside of David Hasselhoff, who speedily swims through the ocean in order to send them back to Bikini Bottom. During the middle of the swim, SpongeBob and Patrick see the boot of the Cyclops that he stepped on Dennis with. It stops behind his foot and lifts back to show Dennis, who is squished into a green pulp like Plankton always does when somebody steps on him. Dennis then detaches from the boot and onto Hasselhoff, revealing that he is still alive. He then tries to kill SpongeBob and Patrick a second time. Dennis grabs SpongeBob by the throat but the latter blows soap bubbles into the hitman's eyes, making him to toss SpongeBob, but Patrick manages to catch him. The enraged Dennis then corners SpongeBob on Hasselhoff's heel. As Dennis prepares to crush SpongeBob and Patrick with his cleated boot, he suddenly hears the honk of a boat's horn. Dennis turns around to see, to his horror, Hasselhoff swimming straight towards a catamaran. Dennis is struck by the catamaran and his fate remains unknown.

He also made a non-physical cameo in a wanted poster in the SpongeBob episode "Call the Cops", but this doesn't solve Dennis' fate as The SpongeBob SquarePants Movie is the finale of the series.

Dennis is portrayed as a fearmongering and homicidal sadist who never shows mercy towards his targets. He is a vituperative and bloodthirsty assassin who supposedly tries to slaughter SpongeBob and Patrick and prevent them from bringing the crown to King Neptune. Despite this, he’s ready to let his victims go if they’re able to bribe him such as when he grabs SpongeBob's money and says "It's gonna take a lot more than five...", which shows that he is willing to let them go but it is unknown what the exact amount is because he noticed that SpongeBob gave him Goofy Goober Dollars which are obviously not currency. He’s murderous since he says "Dennis always gets his man!", which implies that Dennis successfully killed all of his previous victims.

Despite his sadism, Dennis sometimes presents himself as a professional. Not only is he ready to spare his targets if they pay him an unknown sum of money, but he is somewhat affable when not angry. However, he generally only does this because as a hitman, he must present himself as a normal being to avoid detection. He proves that he is more than willing to murder people who aren't his targets if they cross him. He seems to show some slight respect to his victims such as when he says that SpongeBob has guts after he jumped to David Hasselhoff's other leg.

Dennis is a tall and slender fish who has olive green skin. He usually wears a black cowboy-type hat, a gray shirt, a black vest with the word "DENNIS" on his back, a pair of silver shoulder pauldrons, a right-hand fingerless spiked glove, a pair of black sunglasses, a red neckerchief which covers his mouth, black trousers, a dark gray utility belt with a skull symbol, and a pair of black boots with spikes underneath. When Dennis is crushed by the Cyclops, his clothes are damaged and ragged, he also has eyes with black irises and a mouth reveals sharp and pointy teeth. His appearance was inspired by various motorbike gang members.

Dennis' name was found in the back of the vest.

Dennis driving on the road, his shades reflecting the image of the same road that Spongebob and Patrick drove during the journey to retrieve the crown located at Shell City.

Dennis (in blob form) getting himself off the Cyclops' boot for his revenge.

Dennis, having smashed shades and ripped clothes, comes back for revenge and returns to carry off where he left off after getting stepped on by The Cyclops before killing SpongeBob and Patrick. 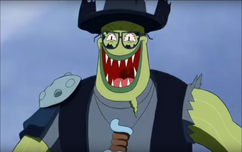 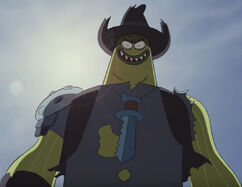 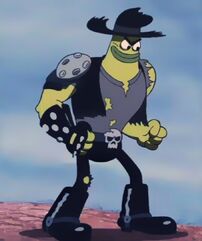 Dennis' cameo in "Call the Cops". 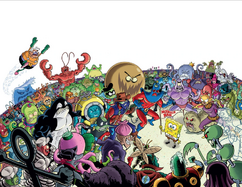 Dennis' cameos in The Ballad of Villains.
Add a photo to this gallery

Retrieved from "https://villains.fandom.com/wiki/Dennis_(SpongeBob_SquarePants)?oldid=4264040"
Community content is available under CC-BY-SA unless otherwise noted.