The Carjacker
The Shooter
Spike

Robbing and killing other people.

Evade Spider-Man/Peter Parker and try to kill him (failed).

He is a criminal who one night decided to rob a wrestling establishment, encountering with Peter Parker when he robs the corrupt organizer. Bitter over the organizer not paying him properly, Peter allows Carradine to get away with the money, but this turned out to be a fatal mistake, given that letting the burglar escape causes his Uncle Ben's death. Though Carradine was accused of murdering Ben while hijacking his car, it later turns out that Ben's killer was actually Flint Marko, his accomplice and that Peter attacked the wrong person.

He was portrayed by Michael Papajohn, who also portrayed the InGen Contractor in Jurassic World.

After Spider-Man wins a wrestling match, the manager cheats him out of the reward money (giving him only a hundred bucks instead of the promised three thousand). Shortly after, Carradine arrives, points a gun at the manager and steals all his money. The manager tells Parker to stop him, but Parker spitefully lets him go. The Gunman thanks Peter as the Elevator door closes and a policeman angrily calls out Peter for letting the Gunman go. The manager told Peter that he could've stopped him and now he got away with his money, but Peter selfishly told him that it isn't his problem.

Some time later, Parker finds a crowd of people gathered around a mortally-wounded Uncle Ben, who is believed to have been shot by a carjacker. Uncle Ben succumbs to his wounds and passes away, prompting Parker to pursue the alleged murderer before he dies. Parker discovers the carjacker was the same person who ran past him. Taking advantage of Parker's dismay and unwillingness to kill him, Carradine attempts to shoot him, who snaps his wrist. Intimidated, Carradine backs away, only to fall out the window to his death.

Carradine doesn't appear in the film, but is mentioned once by Parker as the latter was confessing to Aunt May that he let the thief go that resulted Ben's death. May, though understandably shocked at first, let's Peter know that she does not blame him after a few days of coming to terms with the information.

A few years later, Parker and Aunt May are informed by Captain Stacey that new evidence indicates that Carradine was not the true killer, but rather the accomplice to the true murderer, Flint Marko. Parker feels tremendous guilt for enabling an innocent man to die and angry at the police for failing to catch the real culprit.

After a climactic battle, Marko confesses to Parker that he only wanted Ben's car as he was stealing money to support for his sick daughter Penny, and that Carradine was helping him out on it. However, as Ben tries to reason with Marko, Carradine ran up and slapped Marko on the shoulder, startling him and causing him to jolt and accidentally shoot Ben in the chest, much to Marko's shock and horror.

As Marko was wrecked with guilt for this, Carradine abandoned his partner as the police arrive to the scene. Carradine was later pushed out a window by Parker that same night. As such, Carradine was inadvertently responsible for Uncle Ben's death, and Marko assures to Peter that he is truly sorry for what happened to Ben.

Realizing now that Ben's death was a genuine accident (as neither Marko nor Carradine had any intention of killing him in the first place), Parker decides to forgive Marko and lets him escape so that he can support Penny.

In the video game of the first film, the Burglar appears as the first boss and the leader of the Skulls Gang. However, his name in this iteration is "Spike" (regarding that the name "Dennis Carradine" wasn't officially given until the third film's release). 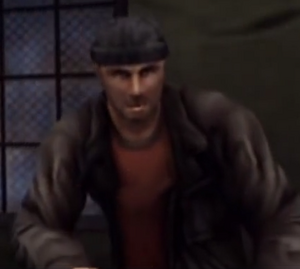