NOTE: For the film series version of this character, click here.

Steal the embryos from Jurassic Park and gain the $1,500,000 that Dodgson owes him (failed).

Dennis Nedry is the central antagonist of the 1990 science fiction novel Jurassic Park by the late Michael Crichton. He was a Jurassic Park computer programmer who, due to the low salary that left him struggling to make a living, turned on park owner John Hammond and stole dinosaur embryos to sell them to a rival company called Biosyn that has failed to make their own dinosaurs.

Dennis was originally from the city of Cambridge in Massachusetts and worked at Integrated Computer Systems, Inc. He eventually worked at the theme park located on the island of Isla Nublar, known as Jurassic Park, as the project supervisor of the Jurassic Park Project, were first told to "design a module for record-keeping". He always worked in the dark, and was never told anything.

Nedry became very annoyed by InGen, as John Hammond kept asking for things that were not part of his original contract, as well as the fact that InGen demanded that those things must be done. When Nedry refused to do so, lawsuits were threatened, and letters were written to his other clients, insinuating that he was an unreliable worker. With no other choice, Nedry chose to return and carry out his work, but not for extra money.

Soon after, the malicious Lewis Dodgson, who worked for Biosyn, approached Nedry, and they made a conspiracy to steal many dinosaur embryos from InGen, giving him a $1,500,000.00 payoff. Nedry accepted the offer, and even recorded one of their conversations as insurance, just in case Dodgson attempted to rip him off. Nedry then (or already) coded the trapdoor program Wht.Rht.Obj, which existed in a code that shut off all the security systems and electrified fences. This allowed Nedry to steal the dinosaur embryos. There was also a storm on the island.

On that very same night whence he carried out his plan and the storm struck the island, Nedry discreetly activated his secret computer protocol, which caused security systems to shut down all over the theme park, thus putting Alan Grant, Ian Malcolm, Lex, and Tim Murphy's lives all at risk, as they were then stranded in their tour vehicles outside the unmanned Tyrannosaurus rex paddock. He then stole the embryos from the freezers, stored the said embryos in a specially adapted can of Gilette shaving foam which he got from Lewis Dodgson, and snuck away from the compound into a gas jeep, driving it to the East Dock. Nedry's hopes were to get to the dock, get the embryos to Dodgson, and then return to the theme park to restore all the security systems before he was missed. However, the storm caused Nedry to veer off the road. There, he encountered a Dilophosaurus wetherilli, which disemboweled him by blinding him with its venomous saliva, ripped his stomach wide open, caused his intestines to spill out, and crushed his head with its jaws.

Nedry's body was found by Robert Muldoon and Donald Gennaro, which was now being devoured by a pack of scavenging Procompsognathus triassicus. Muldoon had very little sympathy for his death, having witnessed all of the demises and chaos that Nedry indirectly caused. When Gennaro asked what to do with the body, Gennaro told him there were more important things to worry about, and they left the body behind.

Nedry's dead body was presumably destroyed when the entire island of Isla Nublar was bombed by the Costa Rica Air Force. 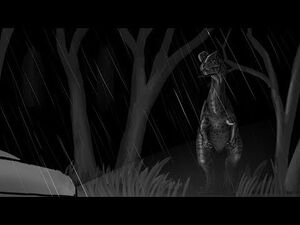