It's Always Sunny in Philadelphia

Dennis Reynolds is one of the five main protagonists of It's Always Sunny In Philadelphia and a member of "The Gang" and twin brother of Dee Reynolds. Dennis is an amoral, perverted narcissist who uses and manipulates people to get what he wants; it is frequently implied that he has Borderline Personality Disorder.

He is portrayed by Glenn Howerton.

Dennis was born on August 18, 1976, alongside Dee, to Barbara and Frank Reynolds. When he and Dee were children, their grandfather took him and Dee to a summer camp - that turned out to be a Neo-Nazi camp. During his childhood, he killed four crows right in front of Dee. It's unknown if this was a physical occurrence or his cruelty towards animals.

He was dismissed from a counselor position in summer camp due to being accused of statutory rape, but still maintains he just kissed the girl in question and that she was only a year younger than him.

Dennis has grandiose delusions that cause him to believe that he is extremely attractive to others. He often "pops off" his shirt in inappropriate situations. He frequently obsesses over any possibility that he may have a visible physical flaw and often spends the remainder of the episode trying to correct it. Dennis is actually very insecure about his looks. Any critique of his looks, however mild or trivial, deeply distresses Dennis and often leads him to extreme behavior. When Dee countered Dennis' insults by claiming that he has a "fat face," it temporarily caused Dennis to become dangerously anorexic.

Dennis' delusions of grandeur extend to his relationships with others. In high school and college, Dennis believed that he was a legend that others looked up to. He later found out that he was wrong on both counts.

Dennis' selfishness and narcissism is so extreme that he has no empathy for anyone. He routinely destroys others' property, and casually mentions sociopathic acts without any awareness that others might be disturbed by them: 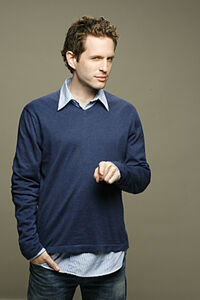 Add a photo to this gallery
Retrieved from "https://villains.fandom.com/wiki/Dennis_Reynolds?oldid=4148059"
Community content is available under CC-BY-SA unless otherwise noted.