Deoxys, also known as the DNA Pokémon, is a recurring antagonist in the Pokémon franchise with an "On-&-Off" style type of villainy.

In the Delta episode unlocked after completing the game, Deoxys travels to the Pokémon planet using a massive meteoroid, large enough to threaten the planet with a mass extinction event. Venturing to the top of the Sky Pillar, the player can summon Rayquaza with the help of Zinnia to fly up into space and destroy the meteoroid. From the meteoroid ruins, Deoxys emerges and engages the player and Rayquaza to a battle.

Deoxys appears as an NPC in these games. First appearing after the story's completion in Pokémon Mystery Dungeon: Red Rescue Team and Blue Rescue Team, he is found in a cave created by the meteor that Rayquaza destroyed. He fought at the end of the dungeon, trying to find the origins of the dungeon.

In Pokémon Super Mystery Dungeon, Deoxys appears through several cutscenes. Learning of Dark Matter's intentions, both he and Rayquaza attack it from space, although he is eventually turned to stone by it. Once Dark Matter is defeated and the effect reversed, Deoxys is found at Meteorite Crater.

The first one bore a purple crystal visible in its chest. It arrived at the North Pole four years before the events in the movie took place. It was in search of another Deoxys, which bore a green crystal in its chest. However, the purple one was attacked by a Rayquaza while trying to retrieve the meteor containing its friend. The purple one was defeated, and the meteor containing its friend was taken by Professor Lund for research.

During the 4 years that the first Deoxys was regenerating, Tory Lund befriended the energy form of the second Deoxys. Terrified of Pokémon, Tory did not realize that he had befriended one. However, at the same time Ash and his friends arrived, the first Deoxys was fully healed and headed to LaRousse City. There, it constantly released auroras to ask where its friend was, and since there was likely no reply, it multiplied itself to remove any living thing that caused an interference and any electrical device as they clouded its vision.

Later, with the help of Rebecca's computer, Ash and his friends worked together to reunite the two and regain the city's power. Yuko managed to extract the second Deoxys from the meteor with the help of Plusle, Minun, and Pikachu. Much like the way Celebi carried Ash and Sam with its psychic power in Celebi: Voice of the Forest, Deoxys carried Ash and Tory with its psychic power, too.

Eventually, both Deoxys were reunited, but were attacked by Rayquaza once again. After Rayquaza was engulfed by the Block Bots and Tory fell trying to save Plusle and Minun, the second Deoxys saved him while the first one carried Ash and Pikachu with its psychic power. After a safe landing, they departed LaRousse City and returned to space.

Deoxys appears in the episode "The Scoop", following synopsis of the Delta episode from Omega Ruby and Alpha Saphire, where it faces a trainer riding Mega Rayquaza. Despite having the ability to regenerate its body and change forms, it is defeated by Mega Rayquaza's Dragon Ascent and caught by the trainer.

Two Deoxys play major roles in the events of the FireRed & LeafGreen chapter, referred to as Organism No.1 and Organism No. 2. Organism No.1 returns in the Omega Ruby & Alpha Sapphire chapter as a villain.

A flashback revealed that it and its twin, Organism No. 2, were created from exposure to strange radiation when they were viruses floating in space. After being mutated, they attached themselves to a meteor, which crashed into the Hoenn region and was found by Professor Cozmo, who took it to the Mossdeep Space Center for study. However, during Courtney's attack on the Space Center, Team Rocket was able to steal the two space Pokémon in the confusion.

In the FireRed & LeafGreen chapter, Organism No. 1 first makes an appearance as an invisible enemy on the Seagallop Ferry in which it attacked Green and easily defeated her Pokémon. It then kidnapped her parents by sucking them into a miniature black hole, causing Green to go into a coma from the shock of losing the parents she had wanted to meet for so long.

It was revealed later that Organism No. 1 was used to provoke Red, whose anger would alert Organism No. 2, who was connected to him, and lure it so it could be captured.

As Sird explained Organism No. 2's history, she mentioned that as they no longer had use for Organism No. 1, they "disposed of it".

Organism No. 2 eventually broke free from captivity and escaped from Team Rocket. In the process, it accidentally absorbed a sample of Red's blood, causing a connection to form between them and leading him to believe that he was its ancestor.

Organism No. 2 first makes its appearance on Three Island, where it saved Lostelle from a biker gang, though its intentions for doing so are unknown; its name is revealed here by Giovanni.

On Four Island, the Kanto Pokédex holders are used to bait the Deoxys out of hiding. After confronting Carr, Red battles with the mysterious creature, but is unable to win despite his best efforts. The battle left Organism No. 2 heavily injured, forcing it to retreat to Birth Island to recuperate inside of its Delta Shield. This is cut short by the arrival of Giovanni, who came to the island in order to capture Deoxys. Deoxys attempts to avoid Giovanni's attacks, but Giovanni easily sees through its movements and breaks through the Delta Shield, leaving the exhausted Deoxys unable to escape capture.

On the Team Rocket airship, Giovanni uses Deoxys to battle Red, who joined forces with Mewtwo. After a long and tough battle, Red and Mewtwo emerge victoriously. Yellow also arrives on the airship, and her powers allow her to hear Deoxys's thoughts while its origins are explained by Sird. When Carr hijacks the airship, Red helps the weakened Deoxys and asks it to use its power to create black holes and send Silver, Giovanni, Yellow, and Mewtwo to safety.

After the four are sent to safety, Organism No. 2 helps Red to locate exploding Forretress hidden by Carr to blow up the airship. They dispatch all ten with ease and land the airship safely, and Deoxys thanks Red and sets off to find its comrade, Organism No. 1, and find a region with special meteors that allow them to freely change between form. When it leaves, Sird is revealed to be alive after being thrown off the airship, and attempts to capture it. Red, with Yellow in his arms, Blue, Green, Silver, and Mewtwo jump in the way of Sird's attack to protect it, and all of them, except Mewtwo, are turned to stone as a result.

In the Omega Ruby & Alpha Sapphire chapter, the fate of the first organism was revealed. Having attacked Ruby and Sapphire who destroyed it's meteor. With Giovanni confirming it's identity and that Team Rocket disposed of it after it's task was complete, it was attacked by Rayquaza and destroyed. It's core was sent flying through space.

Deoxys plays a large part in the special chapter of volume 3 in the series. Appearing inside a crashed meteorite in Veilstone City, Mitsumi originally saw it crashing down. Emerging, both Team Galactic and Professor Rowan appear on the scene. The beat fires a Psycho Boost at the heroes, and Hareta tries to ask the creature what it's issues are. Tossing him off, Deoxys continues the assault before fighting Hareta. Injured by a horde of Kricketune, the beast is defeated and calmed. It reveals it's intent as well, wanting to learn more about the planet.

In Brawl and Smash Bros. 4, Deoxys appears as a trophy, both in its Attack Form. Also in Brawl, Deoxys appears as a sticker, also based on its Attack Form, which grants additional damage to slash attacks for all Pokémon fighters. In Ultimate, Deoxys is a grab-type primary spirit, and one of the few legendary spirits to have no support slots. When equipped, it increases Ness and Lucas' PSI powers. Its spirit battle is against Mewtwo that has increased attack power and summons Deoxys through a Pokéball. 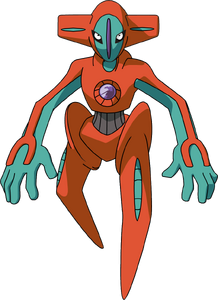