Hunt down or keep all Conduits in the Curdun Cay.

Military Gaolers
The Department of Unified Protection (abbreviated as D.U.P) is the main antagonistic faction in both games of inFamous; Second Son and First Light. It is a federal government agency of the United States founded by Brooke Augustine that tries to arrest all Conduits they label as "bioterrorists".

By 2011, following the events of Empire City, a soldier named Brooke Augustine, along with Celia who possessed a paper power, possessed a concrete power, in which she cannot choose both Conduits and the government. She made a choice; the government. She locked Celia up and created the Department of Unified Protection. By 2012, the D.U.P captured Eugene Sims from high school and took him to the "special school". By 2016, the D.U.P captured Abigail "Fetch" Walker in Seattle and took her to Curdun Cay prison.

2 years later, Fetch escaped the jail and killed Shane in revenge for causing her to unwillingly kill her brother, Brent. Fetch is then contained into Military's custody along with Eugene and Henry Daughtry who later caused the vehicle to crash near Salmon Bay and the trio escaped.

Delsin Rowe developed Smoke power from Hank, then Neon from Fetch and Video from Eugene, so he fought off D.U.P in Seattle. At the last time, he, Fetch and Eugene broke into D.U.P HQ. Delsin absorbed Concrete's power from Augustine and then defeated her, crumbling the empire. 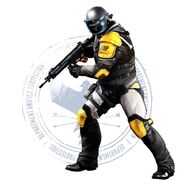 An D.U.P Pawn.
Community content is available under CC-BY-SA unless otherwise noted.
Advertisement