Personal Fears and Demons (by Gary)

Torturing people mentally and leading them to suicide.

Separate Gary from his relatives and friends (Succeeded).

Depression is a nickname given to an unknown sadistic entity terrorizing Gary in Zykov Eddie's indie horror title The Mask Reveals Disgusting Face.

The game is about an ordinary young male who had been diagnosed with clinical depression and have decided to move away from his relatives due to deeming himself a "drag" to all the people around him, choosing a distant house to be his abode. Events take a mystical turn when Gary finds his house surrounded by an insurmountable grid and realizes that something sinister has inhabited the residence.

For the majority of the game we do not encounter the aforementioned entity directly only receiving unsettling hints of it's presence. At first, Depression manifests itself in disembodied noises, most prominent of which is a dry crackling of a rope, an obvious allusion to hanging. It then becomes more aggressive and damages Gary's property, breaking a window and a couple of mirrors, making a strange message on the wall, leaving blood trails and even making a large hole in the bathroom. However, some actions of this entity can be considered helpful. After Gary opens a safe using Depression's clue about time's relation to the code, he reads a sorrowful letter and that's when Depression vandalizes the bathroom floor, allowing Gary to find a flashlight in a cavern beneath the hole. Depression doesn't stop there and interferes with reality itself, making rusty grids appear out of nowhere while warning Gary of his doom and morphing the basement's layout and adding the same grids to either taunt/scare the protagonist or in an attempt to trap him there.

The game's second underground part is littered with similar occurrences, but somehow more disturbing. It plays around with Gary's mind, banging on the door while he acquires the key to another one and bashing it down without confronting him personally, makes another saddening message on a wall and aids his progress one more time by leaving one of the four electric plugs needed to open a shutter door after Gary answers a pointless phone call of a randomly placed telephone.

The game's ending part consist's of a terrifying chase through a straight corridor full of closed doors and a final decision. It is important to note that in that corridor Gary is chased by the wall of a blood-red mist  - Depression's first actual manifestation with the ability to kill him instantly. Finally, Gary arrives at a huge concrete room without a ceiling with the only door vanishing behind him. Gary's own handgun is placed on a pedestal at the end. Depression explains to him that his horrifying journey was to no avail and the only solution is to shoot himself. If the player chooses to give up the game ends with him falling into complete anguish and committing suicide. The other option makes Gary willing to fight for his life, which baffles Depression, provoking it to appear in front of him in a semi-physical form of a floating grey mask, while the concrete room is covered in blood with metallic chains hanging from above and thick pillars dividing it. During the battle Depression is vulnerable to bullets while being able to teleport short distances and drain Gary's sanity upon touching him. After several shots Depression evaporates into a red mist, leaving Gary free from his inner demons and fears. He returns to the surface and finds a reassuring letter from his friends and family, stating that it wasn't there before. Thus the protagonist resumes his normal life again.

Whether it was the metaphorical process of Gary coping with real depression or some paranormal entity seizing his life is left to the player. 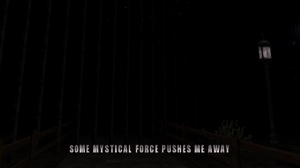 The grid created by Depression to keep Gary helpless. 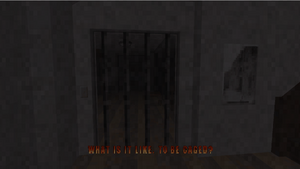 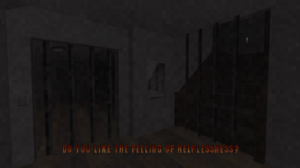 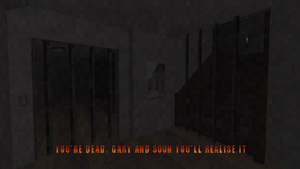 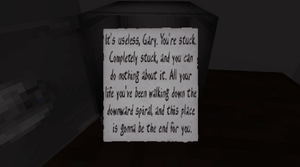 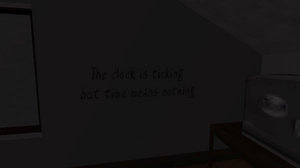 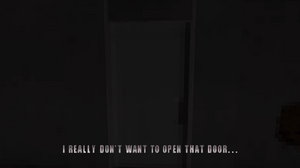 The door that Depression is banging on. 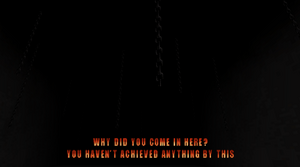 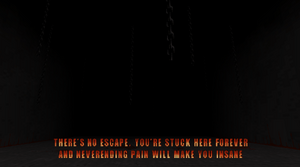 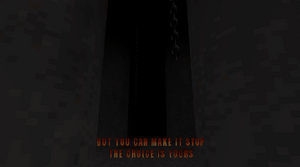 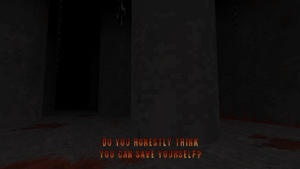 Depression right before the final battle. 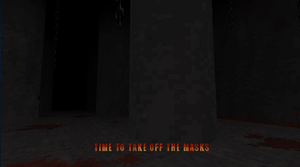 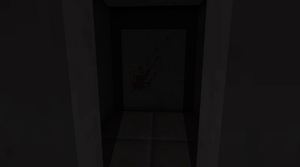 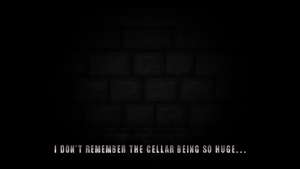 Gary noticing Depression's reality interferance.
Add a photo to this gallery
Retrieved from "https://villains.fandom.com/wiki/Depression?oldid=3595318"
Community content is available under CC-BY-SA unless otherwise noted.