Making profits through his partnership with Whale and the A.S.A.

Deputy Chief Cayman is a recurring antagonist in the 2018 CW show Black Lightning.

He is portrayed by Anthony Reynolds.

Cayman is the Deputy Chief of the Freeland Police Department. He is deeply corrupt and on the payroll of both Tobias Whale and the A.S.A. He hides his money in shell corporation, however, he inadvertedly left a trail that could be tracked back to him.

After Lala, a high-ranking member of the 100 gang has been arrested, Tobias Whale enters the police precinct at night to silence him. Cayman allows Whale and his henchwoman Syonide into the building in order to kill Lala and even wishes them fun.

After the police have been informed by the 100 second-in-command Joey Toledo that Black Lightning has been seen, Cayman rounds up his officers and assembles a task force to capture him. During the strike, Cayman leads one of the three group himself while leaving the command of another group to Officer Henderson. After the raid has been unsuccessful, Henderson wants to know where Cayman got his information and only gets suspiciuos of Cayman when Cayman dodges the question.

Eventually, Black Lightning draws Henderson into his fight against the 100 gang. Henderson, who does not trust Cayman anyway, starts investigating him. He follows Cayman to a meeting with A.S.A. henchmen where he witnesses Cayman providing them with high caliber rifles capable of killing even Black Lightning. Henderson takes photos for evidence and also informs Black Lightning that Cayman and the A.S.A. men are heading towards an A.S.A. facility Black Lightning is currently investigating. When Black Lightning and Thunder attack the lab, A.S.A. head Martin Proctor sends Cayman out to stop them. Cayman sees Thunder and fires his gun at her, but the bullets are all deflected by her suit. When another henchman attacks Thunder, Cayman uses the opportunity to flee.

Together with one of his corrupt policemen, Glennon, Cayman is later called out into the city by the A.S.A. Once they arrive at the location, Glennon mentions that all of this seems suspicious and asks Cayman if he is sure this is not a set-up. Suddenly, they hear a female voice telling them that if this was a set-up, they'd already been arrested or dead. She states that Cayman and Glennon will find the equipment they need in the garbage can in front of them and Cayman agrees with Glennon that the situation stinks. The two policemen turn to leave but suddenly find themselves in the crosshairs of snipers. The female voice once more orders Cayman to open the garbage can and inside, Cayman finds a huge amount of Green Light. The voice tells the men that she needs someone framed swiftly, which Cayman assures her not to be a problem. When he asks who the target is, the voice replies that it is Jefferson Pierce.

The next morning, the police turns up at Garfield High and search Pierce's car and office. When Pierce joins them and angrily offers to accompany Cayman to the precinct in order to straighten out whatever misunderstanding there is, Cayman merely replies that they are almost done. When Pierce asks what they are doing, Cayman informs him that they found Green Light in his car. At the same moment, Glennon "finds" more Green Light in Pierce's desk and Cayman arrests him. When Pierce angrily protests, Cayman threatingly asks him if he is resisting, prompting Glennon to draw his gun. Realizing the severity of the situation, Pierce surrenders and is arrested by Cayman's men.

When Pierce is brought into the precinct, his friend Detective Henderson demands to know what is happening. Cayman brushes him off and orders his cops to bring Pierce into one of the holding cells but Henderson demands to see the search warrant. The two enter Henderson's office, where Cayman throws the warrant onto the table, and while Henderson reads the warrant, Cayman warns Henderson to tread lightly. He tells Henderson not to let personal feelings cloud his judgement but Henderson replies that his eyes are wide open. Cayman claims that this is good, because he would hate to see anything happen to Henderson. He then takes his warrant back and exits the office.

However, Henderson does not give up and instead investigates Cayman's men. After having found evidence for Glennon's corruption, Henderson uses it to press Glennon into testifying against Cayman. As a result, Pierce is freed from his cell due to Glennon admitting to having planted the evidence. Suddenly, Cayman appears in lockup and furiously demands that Henderson tells him what he thinks he is doing. Henderson replies that he is doing policework and that Cayman should have tried it. He leaves the room and when Cayman follows him, Henderson grabs him and rams him into the wall. He reveals to Cayman that Glennon told him many things about Cayman, and that he now has evidence about Cayman's corruption and his shell companies. He then arrests Cayman for corruption and while Cayman shouts that Henderson is making a mistake, he is led away by two other policemen. In the evening, Henderson holds a press conference in which it is revealed that Cayman and his associates have been arrested for corruption and that Henderson has been appointed the new Deputy Chief. 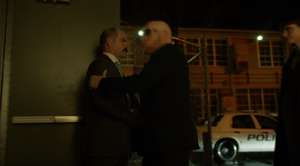 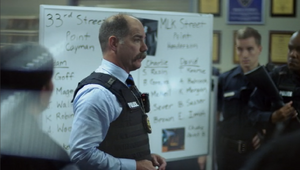 Cayman rounds up his policemen to stop Black Lightning 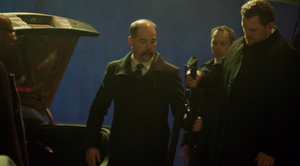 Cayman provides the A.S.A. with weapons 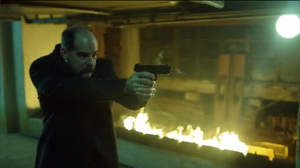 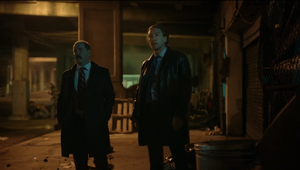 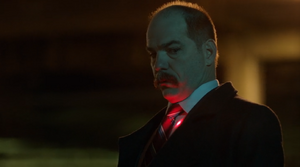 Cayman is intimidated by snipers 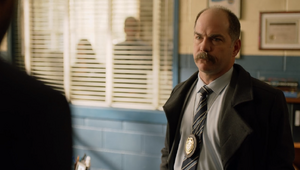 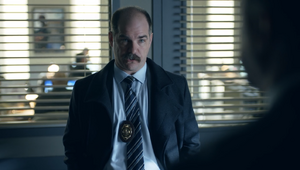