Villains Wiki
Register
Don't have an account?
Sign In
Advertisement
in: Articles under construction, Cleanup, Categories Needed,
and 31 more

Killing others
Incriminating others

Have his grandfather, Hank McCreedy, be remembered

Deputy Foster (first name unknown) is the main antagonist of the 2014 slasher remake The Town That Dreaded Sundown.

He was played by Joshua Leonard.

Foster was a Texarkana native and the grandson of Hank McCreedy, the sixth and forgotten victim of a serial killer responsible for a spree in the border town on the line between Arkansas and Texas decades ago after the end of World War 2. The Phantom Killer attacked three other people and murdered and additional five more, mostly targeting couples and enjoying scouting for them on lover's lanes for eventually escalating to breaking into their homes. The killer terrorized the town and left a permanent, haunting scar in it fro the years to come. McCreedy was the sixth victim, stabbed over twenty-four times and left on a train track dismembered, rumor has it as a "final goodbye" by the Phantom before hitching a train to escape. Foster's grandmother and McCreedy's pregnant widow, Mary, demanded an autopsy, revealing the true cause of death. But with the town's two halves warring over investigations and suspects, McCreedy's murder was buried, and once the suspects were exonerated or let go on little the evidence, the killer was never caught. Mary loathed Texarkana and had her son, Hank Jr., hate the town for it all, which Hank made Foster do as well after having him. Mary wanted Hank Jr. oto terrorize the town for revenge, but on her deathbed, she swore Foster would do "what [her] son didn't have the balls to". Foster grew up and achieved the rank as deputy in the local police force. He buried being McCreedy's grandson for years, but he always wanted to take his revenge on the town and make sure they remembered McCreedy for good, partly from the influence of his family. He came across varsity sports star Corey Holland, who hated his expectations and wanted his own infamy Texarkana didn't hinge on, and Foster saw his chance. Encouraging Holland into becoming his partner, the two became the new Phantoms of the generation, planning a killing spree to evoke the original Phantom, the murders leading back to McCreedy and publicizing the case once and for all.

The Town That Dreaded Sundown

The plan's put into action the night the original The Town That Dreaded Sundown is shown in an outdoor theater in the town on Halloween. Holland is there with girlfriend Jami Lerner, who became quiet and was shunned after her parents died in a car accident. When Lerner's not enjoying the film, the two drive off to a lover's lane, both of them talking about their college ambitions. Foster comes up in full disguise and, after Holland says he's "just a Peeping Tom", makes them both get out of the car. Pointing a gun in their faces, Foster has Holland take off his pants and lie down on the ground, Lerner turning away. Pretending to slash Holland to death just enough makes Lerner break into a run in the woods. Foster catches her and attacks her, rumbling "This is for Mary. Make them remember." Lerner reaches a diner at a nearby road and collapses before being taken to the hospital. She's questioned, and ironically Foster's her assigned dispatch watch.

A body identified as Holland is found the next day at the foot of a statue severely mutilated. It's really an runaway teen who's never named, Foster and Holland stabbing him to death before disfiguring his face and taking all his teeth, two of Holland's left at the scene. Lerner, who wants a career in journalism, in or out of Texarkana, starts trying to investigate the original crime spree after the funeral in Holland's memory. Lerner's hated by Holland's mother, Margaret, fro not fighting for Holland and running for her own life.

The murders continue with Corporal Daniel Torrens, who's returned home from military service, and his girlfriend Kendra Collins, the two spending an evening together in a motel to celebrate his return. When Collins has Torrens go out and get cookies from the vendor, Foster decapitates him and them breaks the motel room window with his head to terrorize Collins. Collins jumps out the window, but since it's not on the first floor, she breaks her legs and limps to the car t try and start it up. Holland's there, waiting for her to slash her to death.

Lerner gets a call from Foster saying "I'm going to do it again and again until you make them remember". When she sees the report of the couple's murder of the motel, she tells Foster, not knowing he made the call. Homes are locked up and the town arranges a meeting to address public fears and concerns. Amidst the chaos, the town is insisted to pull together to protect each other, and the movie's arranged to never be screened again in the twin cities. It doesn't stop a manifesto email sent to Lerner, pretending to be the original Phantom Killer and wanting the town to "let [his] soul rest in peace". At the vigil for the victims, a disturbed local who wanted to die, named Paul Mason, approaches the crowd in the Phantom's garb, but a marine official shoots him dead, causing the town to celebrate and assume the Phantom's finally dead.

But two closeted gay band members, black Johnny and white Roy, are killed at a junkyard by Holland, Johnny being shot, and Roy being stabbed with a mocked-up trombone knife like in the original movie. The town's fanatical reverend, Hank Cartwright, is revealed to have sent the email, partly to expand the church congregation, but he's not suspected of being the new Phantom. Foster later targets Deputy Tillman, when picking a woman named Adelle and taking her home for a blowjob. Foster shoots Tillman through the eye, but Adelle manages to escape. She runs into a farm field, but Foster catcher and stabs her to death. Through Charles Pierce Jr., Lerner and newfound friend and lover Nick Strain finding out about Hank McCreedy from him, revealing the motive and giving credence to the theory on the killer.

Lerner's insisted by her grandmother, Lillian, to leave the immediately to state with her uncle in California. But Foster and Holland stalk them and intend to stop to escape. After Lerner has sex with Strain as a goodbye and they part ways, Holland abducts Strain and stabs him to death. When Jami and Lillian reach the gas station and Jami goes in for concessions, the clerk, an elderly customer, and even Lillian are all shot dead, which Jami finds to her own horror, seeing Foster in a higher vantage perch in a building across the gas station, she grabs her mother's gun and runs to the old Union train station. Foster makes her run onto the tracks, where she finds Strain dead and in pieces, aligned outside of the trains wheels so an oncoming train drives right through Strain. Foster calls her with a taunt of "like a dog with a bone ain't ya", and Lerner sees Holland on the other side of the train before disappearing. Lerner runs into the woods, gun in hand, but Holland shoots an arrow in her leg while she crosses a stream and, when she sees Foster in front of her, Holland shoots her shoulder too. The two killer approach as she's crying on the ground, and Foster leans his head down to motion her pulling off his mask.

She sees Foster's the killer for the first time, and while forcing her to look, she sees Holland reveal he's the other killer removing his mask. She screams and cries "I saw him die, I watched you die" and also mentions the corpse identified as Holland. Foster and Holland remind her of forcing her to look away and reveal the runaway's murder and setup. Foster reveals he's McCreedy's grandson and thanks Lerner for making the town remember McCreedy. Lerner sobs why Holland in involved, and starts ranting how he never wanted the town to choose who he is. Lerner denies saying they're "the same" in that sense, and Holland starts ranting he wanting something more original for his own glory, so he became Foster's accomplice in the spree. In the middle of Holland's rants, especially turning into screams, Foster shoots Holland dead. Pushing the arrowhead deeper in Lerner's shoulder, Foster brags the death-faking and Lerner's search for McCreedy is meant to frame them both for the crimes, which he says Texarkana'll quickly accept out of fear it's not over. As Foster's about to stab Lerner, she grabs her grandmother's gun and shoots Foster in the chest into the swamp. Slowly getting up, Lerner grumbles "it is over", before shooting Foster in the face, leaving his body to sink into the stream. Lerner breaks down and cries, and a voiceover of her reveals when she called the police, they combed the waters and never found a dead Foster, either sinking in or drifted down the stream. Lerner laments the evil of the Phantom won't leave Texarkana, and the citizens believed "you can't kill a specter" being the reason why Foster disappeared. Starting her life in the college Lerner's accepted in, one night walking home, she's stalked a figure casting a shadow on the brick wall to her left. It's never revealed what happened to her, and if the figure's harmless, not related to the spree, or Foster having survived. 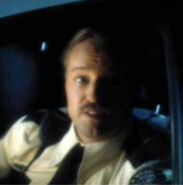