Prince of the Pistachions (formerly)

King of the Pistachions (currently)
Show intern (in disguise)

Plotting with his fellow Pistachions.

Avenge his father's death by exterminating the Earth's population with his population of Pistachions.

Although Derek did not appear much in the first season, his origins were shown in the episode "The Substitute", where Milo Murphy and his friends accidentally created a sentient blob that attacked the students and two time-traveling agents named Vinnie Dakota and Balthazar Cavendish. In the end, the blob left the school and came into contact with a broken pistachio sapling on the lawn, causing it to be replenished to its former glory and resulting the birth of King Pistachion, who would breed his own army of Pistachions (including Derek) to take over the world.

In the hour-long special "Missing Milo", Derek appeared briefly when King Pistachion ordered him and several other Pistachions to capture Balthazar Cavendish, Vinnie Dakota, and Milo Murphy to prevent them from going back in time to destroy the sapling. However, the trio manage to escape in their time-travelling limo, but Derek has managed to catch up by holding onto the limo. As they travel through the time stream, Vinnie notices Derek and used a bag of clocks to knock him off the limo, leaving a helpless Derek to stumble around the time stream.

Following the deaths of King Pistachion and his other Pistactions in Milo's time, Derek ends in the year 1955. Smiling at this, Derek happily runs off as he intends to get revenge on the heroes for defeating his father and wiping out his race from existence.

In the episode Fungus Among Us, it is revealed that Derek spend the next 10 years secretly plotting his own revenge against humankind for wiping out his race. Disguising himself as an intern for the Dr. Zone show in 1965, Derek uses the show's profit to formulate a successful plot that involves extinguishing the human race and replacing them with new Pistachions in disguise. He even was able to create his own army of Pistachions to diguise themselves as several of the show's crewmembers to help him out. This causes the time stream to change, allowing the Pistachions to round up the majority of the world's population.

With only Milo, Diogee, Dakota, Cavendish & Orton Mahlson remaining as the only ones to evade the Pistachions' capture, they seek to find the world's first time-traveler Professor Time to get some answers to stop Derek and the Pistachions from taking over the world. However, in the episode's cliffhanger ending, the five end up meeting the evil scientist Heinz Doofenshmirtz (who too has avoided being imprisoned by the Pistachions for unknown reasons) after being trapped in his lair by accident.

It is later revealed that Derek himself spent the next 50 years expanding his race, which allowed enough Pistachions to take over the world. He is first seen under his Dr. Zone disguise where he confronted the main characters' friends about his successful takeover before revealing his true identity. He even raised the stakes by revealing his new plot to turn all humans into Pistachions with his newly developed machine called M.U.L.C.H.T.P. (Machine Used for Literally Converting Humans To Plants, though the last two letters are silent as Derek claimed) to take over the entire world, even using it to turn all of the main characters' families and friends into Pistachions.

Fortunately for the heroes, Doofenshmirtz was able to create a new time machine to gather up orange soda from 1965 that can easily destroy Pistachions just as his future self (revealed to be the actual Professor Time) arrives to bring Orton back to 1955. Witnessing this, a horrified Derek tries to stop Professor Time and Orton, but he is too late as they head back to 1955 and used the orange soda to destroy the 1955 Derek. With his past self destroyed, the future Derek can only watch in horror and fury as he starts to fade away from existence along with the other Pistachions. This restores the original timeline for good, turning everyone back to normal.

Derek smiling at this, hoping for a chance of revenge. 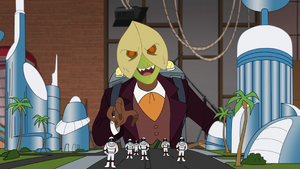 Derek revealing his new plot to replace the entire population with new Pistachions by using the time stream.

Derek having created his own army of Pistachions.

Derek berating his friends for letting the heroes escape. 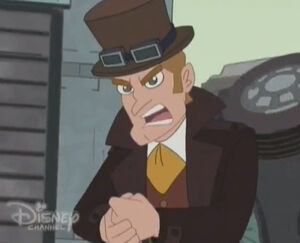 Derek in his Dr. Zone disguise while confronting the kids in the present. 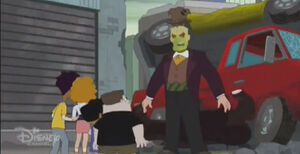 Derek revealing his true identity to the kids. 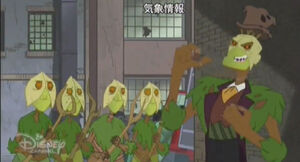 Derek announcing his next plot to turn all of humankind into Pistachions. 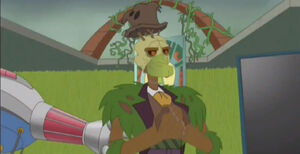 Derek being delighted to see the kids being captured and prepared for their forced mutation. 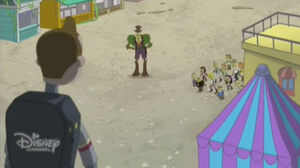 Derek taunting Milo and the gang that he has turned all of their families and friends into Pistachions. 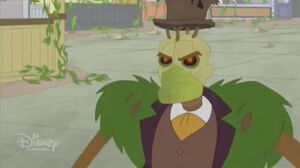 Derek being angry to see that the future Doofenshmirtz (known as Professor Time) has arrived with a new time machine to stop the madness. 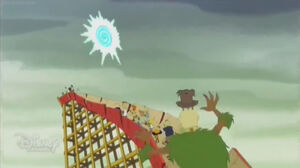 Derek being horrified to see Professor Time transporting Orton back to 1955. 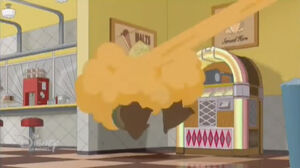 The 1955 Derek being destroyed with orange soda sprayed by the arriving Professor Time and Orton. 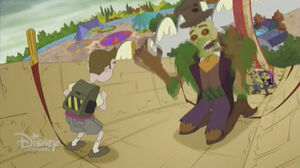 Derek realizing too late that Professor Time and Orton has destroyed his 1955 self. 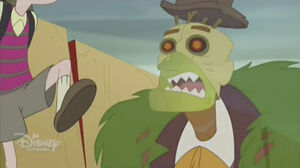 Derek finally being erased from existence, much to his distraught.