Get away with his crimes (failed)

Derek Warner was a major antagonist of the British soap opera Emmerdale Farm.

He was portrayed by Dennis Blanch, who took over the role from Freddie Fletcher in 1985.

Derek and Tom stole Christmas trees from Home Farm in December 1980, and knocked down and left Joe Sugden for dead. They were charged in 1981 and Derek was sent to prison. Derek was released in 1984 and convinced Tom to go poaching with him and Kevin Haynes with explosives. They were caught and the three of them received custodial sentences in October 1984. Derek was released in 1985 where he, Harry Mowlam and Derek's henchman Keith Johnson staged an armed robbery on a wages truck, initially intending to blow it up with the guards inside. Harry hid the money in an attempt to take it all for himself, so Derek attempted to run him down in his car then took Harry hostage at knifepoint until Harry lead him to the money. Derek caught Harry helping himself to the loot and Harry kept bragging about his riches, so Derek beat Harry to death. Harry had just lost a fight to Matt Skilbeck, and Derek allowed Matt to be blamed. However, Matt was exonerated when it was revealed that Harry's body was further downstream than where the fight took place. The current nor Matt were strong enough to move the body.

The police managed to work out that the hut on Harry's farm contained the robbery money and went to raid the place, as Derek was preparing to shoot Keith, having found him helping himself to the loot. Keith was arrested but Derek, being armed, managed to escape. He fled to the Vicarage where he took vicar Donald Hinton hostage, shooting at two police officers. Donald tried to convince Derek to give himself up and made clear to Derek he was either leaving in handcuffs or a body bag, and Derek decided to give himself up. 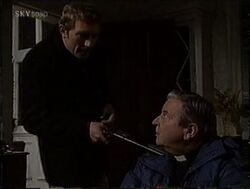