Destroy the Tower of Heaven (succeeded).

Dereputa of the Meteor is the combat commander of Warstar and a major antagonist in the Tokusatsu show Tensou Sentai Goseiger. He is a Zutinmanian who follows a warrior's code and is one of Mons Drake's top commanders. His signature attack is Meteor Bullet, where he uses his bladed forearms to unleash an energy blast.

During Warstar's initial invasion of Earth, Dereputa destroyed Heaven's Tower to hinder interference from the Gosei Angels before fighting Alata, Gosei Red. Since that time, Derepeuta became Gosei Red's nemesis after severely injuring his forearm in their initial confrontation. However, when Mons Drake pushes his plans forward, Dereputa is seemingly destroyed by Hyper Gosei Great.

However, discarding his breastplate with a scar on his chest from the attack, Dereputa came to the realization of acting on his own to prove his superiority. After Mons Drake's demise, Dereputa resurfaces to settle things with Gosei Red while attacking his teammates to ensure no interference. Though finally defeated, Dereputa unknowingly releases the Yuumajuu. 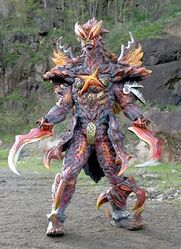 Dereputa wounded.
Add a photo to this gallery

Retrieved from "https://villains.fandom.com/wiki/Dereputa_of_the_Meteor?oldid=4035389"
Community content is available under CC-BY-SA unless otherwise noted.