Derrick Arden (in Japanese: デリック・アーデン, Derikku Āden) is one of the characters in the Black Butler/Kuroshitsuji manga, appearing in Public School arc and serving as the hidden secondary antagonist of the arc (with the Undertaker as the true main antagonist).

Derrick Arden was a fifth-year student at Weston College. He is the son of Queen Victoria's cousin, Duke Clemens.

Seemingly, Derrick earned fame and favor for his "kind" and "sunny bright" side, plus his "talents". He was basically a star of Weston High and the favorite of the prefects, but in reality he was a cruel bully who stole other students' works to make himself look good.

Eventually, the P4 He and his friends bullied many other students to steal their work and make himself shine before the P4. He showed no signs of remorse when the P4 found out about this, and he manage to bribe the Vice-Principal and get a lighter punishment.

However, once he makes a remark he would become the next member of the P4, this prompts P4 to kill him to protect the traditions of the school. Derek was eventually had his skull bashed by Herman Greenhill. However, while Ciel Phantomhive and his men were investigating the case, Derek was revived as a Bizzare Doll by the Undertaker (under the disguise of the mysterious headmaster), but he was destroyed by Sebastian Michaelis after Ciel had realized that Derek became a Bizzare Doll and ordered Sebastian to do so.

Eventually, Ciel reported the truth to the Queen. Even though the P4 was expelled (instead of put in jail) for their crimes, no one shed a tear for Derrick's death. Derek's true nature was hid by royalty members in order to avoid a shocking scandals. 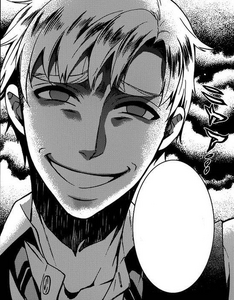 Derek's true nature.
Add a photo to this gallery

Retrieved from "https://villains.fandom.com/wiki/Derrick_Arden?oldid=3485412"
Community content is available under CC-BY-SA unless otherwise noted.