Kill all who he felt were

Derrick Jackson is the main antagonist of the 2018 American slasher film Thriller. He was one of the children that lied and got Chauncey thrown in jail. He blamed Amani's death (who was his girlfriend) on the other children and wanted to kill them for revenge.

He was portrayed by Marcus Ryan Doyle as a thirteen-year old and Luke Tennie as a seventeen-year old.

Derrick is a stocky 6'3" black male with black short hair.

While disguised as Chauncey, he wears a black morph mask, a black hoodie, black gloves, black jeans, and a black pair of sneakers with white soles.

In Compton, California, a group of neighborhood kids decide to pull a prank on a shy mentally challenged kid named Chauncey Page. The plan was that Lisa would lure Chauncey to an abandoned building, and once inside the kids would scare him by chasing him around while wearing skeleton masks and chanting his name. This ended in disaster when Amani Morris startled Chauncey and he pushed her, causing her to fall over a railing and die. Fearing that they would get in trouble, the other kids lie and paint Chauncey as a bully and murderer. The police arrest him as Chauncey vows to get revenge.

After being upstaged by Unique and rejected by Kim, Derrick dresses in his killer clothes and begins killing the rest of his friends. While Eddie and Tiffany are arguing, he grabs Eddie from behind and strangles him. Tiffany walks around the corner and sees Derrick and Eddie's corpse. She tries to run, but ends up hurting her leg, Derrick then picks up a rock and crushes her head with it. Meanwhile, Kim and Unique have sex in his car, afterwards Unique has to take a phone call outside. Derrick sneaks up on him and snaps his neck, before grabbing Kim out of the car and strangling her off-screen. Lisa goes to the bathroom to wash the cherry kool-aid off her dress, but is ambushed by Derrick, she manages to fight him off and he chases her throughout the empty school. Derrick eventually corners her on the roof and she tries to fight back. She manages to pull his mask off, but is no match for him. Derrick pushes her off the roof, but she hangs on to a pipe and climbs down. Thinking he had killed her, Derrick heads back to the gym and kills Andre with a fire axe. Andre walks out from behind the curtains and dies in front of everyone. As Derrick emerges from the curtains, Principal Hurd pushes him over the table and tells everyone to run. Derrick knocks him out with a speaker and starts chasing Gina and Ty. The chase ends on the football field where Derrick knocks down Ty and repeatedly punches him in the face, before Lisa jumps on his back. He throws Lisa to the ground attempts to strangle her, but Detective Johnson holds him at gunpoint. Detective Johnson pulls off his mask and reveals the killer to be Derrick Jackson, who blamed Amani's death on Lisa, Ty, Kim, Gina, Andre, Ronny, Eddie, and Tiffany. After explaining his motive, he struggles to grab Detective Johnson's gun before the real Chauncey Page tackles him to the ground. The resulting struggle ends when Chauncey throws Derrick into the road and he gets hit by a car. Derrick is then taken to the hospital where he struggles and keeps yelling that his friends need to pay. Chauncey watches this from the hospital window with a smirk on his face. 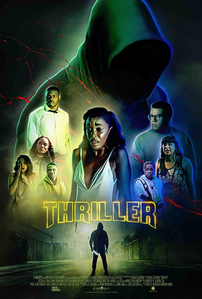 Derrick Jackson on the movie poster.

Derrick sneaking up on Ronny.

Derrick crosses out Ronny's name on his kill list.

Derrick Jackson is revealed to be the Killer.

Derrick in the hospital after being hit by a car.