Desaix is a major antagonist in the first half of Fire Emblem Gaiden and its remake, Fire Emblem Echoes: Shadows of Valentia. He is a baron who overthrew Zofia's royal family, becoming the country's chancellor.

He was voiced by Go Shinomiya in Japanese and Dan Woren in English.

Desaix is a brawny, 48-year old man with a broad nose, square jaw. In Fire Emblem Gaiden, Desaix has short blond hair, muttonchops, and a large mustache, while in Fire Emblem Echoes: Shadows of Valentia, he also gains a beard. He wears purple armor with gold accents, as well as a red cape.

Desaix justified his plot to assassinate the Zofian royal family with his belief that their patriarch, King Lima IV, was a hedonistic and poor leader spoiled by Mila's blessing. He also believed that Mila herself, growing slothful from her slow degeneration, no longer deserved to be venerated as a goddess. However, deep down Desaix himself is little more than a power-hungry schemer; when he does obtain authority he imposes heavy taxes on Zofia's populace and throws the country into famine. He is also a coward not above using body doubles to avoid coming to harm.

Desaix ingratiated himself with the Zofian royal family after claiming to prevent an assassination attempt on King Lima IV. The perpetrators, a branch of the royal family, were executed along with their kin, while Desaix received Lima IV’s recognition and started to participate in governmental affairs. When Lima IV made poor leadership decisions, the high-ranking General Mycen attempted multiple times to reason with the king, only to be stopped by Desaix at every turn. Mycen was increasingly distanced from the royal family. The general populace was displeased by these events, but Zofia was a bountiful land, and as long as they could live in peace, the public was complacent. As a result, Desaix's political rise went unchallenged.

With Lima IV increasingly becoming a puppet to Desaix, any criticisms whispered to him would immediately lead to imprisonment or even execution. To further consolidate his power, Desaix conspired several deaths within the Zofian royal family and framed Mycen for his crimes, resulting in the general's banishment. Some Zofian officers defended Mycen, but because he originally hailed from the rival country of Rigel, his departure was never scrutinized.

With the death of Lima IV's consort Liprica, Lima IV's poor habits and the kingdoms corruption worsened. One night, the villa the royal children lived in was set ablaze. Most of the villa's residents were slain by assassins hired by Desaix. The only survivors were Princess Anthiese, who was rescued by Mycen, and Prince Conrad, who fled to the Lost Treescape of Rigel.

In the year 398, Zofia rejected Rigel's request for assistance following a famine and drought, triggering an all-out war between both nation. For over a year, the inexperienced Zofian army was repeatedly defeated by the finely-honed Rigelian Army, and Rigel steadily crept into Zofian territory. Desaix contacted the Regelian Army's upper echelon and negotiated a cease-fire in exchange his appointment as chancellor, the retention of autonomy, and a large compensatory sum of gold. In truth, he had sold Zofia to Rigel. In the name of compensating the Rigelian Empire, Desaix collecting imposed heavy taxes, collected exorbant amounts of wealth and food from the citizens, and executed those who opposed his tyranny or were suspected of doing so. The Rigelian Army remained garrisoned in Northern Zofia and tensions continued to mount.

A year after the cease-fire, Desaix triggered a coup d'etat and killed the remaining members of the Zofian royal family, including Lima IV. Meanwhile, away from the capital, smaller Zofian villages became playgrounds for Desaix's thieving soldiers, increasing Zofia's poverty, while ruffians gathered and spread in influence. Around this time, the Deliverance was formed in order to oppose Desaix, though the chancellor captures the Zofian knight Mathilda to use her as leverage to force the surrender of the Deliverance's leader, Clive. Eventually, Clive was replaced as leader by Alm, and the Deliverance stormed Zofia Castle, killing the captain of the guard, Slayde. If they slew Desaix prior to Slayde, the chancellor is revealed to be no more than a body double, and the true Desaix flees to his personal fortress in Northern Zofia, taking the royal sword with him. When Alm's army arrives at the fortress to rescue Mathilda, Desaix orders for her to be executed slowly with arrows. Forseeing the arrival of the Deliverance in advance, Desaix also requested aid from the Rigelian Army to finally thwart them. Despite this aid, however, Alm's forces rescue Mathilda and slay Desaix. With his dying breath, Desaix curses Mycen for giving Zofia to "Rudolf's pup", having secretly discovered Alm's true identity. 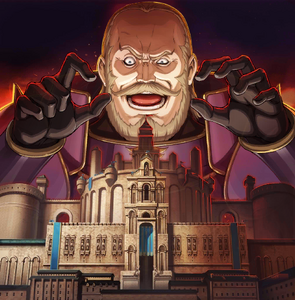 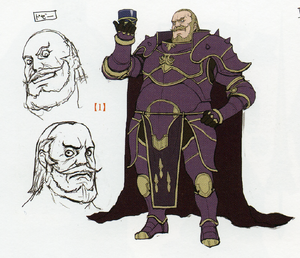 Concept art of Desaix for Fire Emblem Echoes: Shadows of Valentia.
Add a photo to this gallery

Retrieved from "https://villains.fandom.com/wiki/Desaix?oldid=3975228"
Community content is available under CC-BY-SA unless otherwise noted.