Traveling the Galaxy
Training his apprentice

Desann is the main antagonist in Star Wars: Jedi Knights II: Jedi Outcast and a posthumous antagonist in Star Wars: Jedi Knight: Jedi Academy'. He's a Chistori Male former Jedi who later became a Dark Jedi Master and an agent of the Empire Reborn faction. He's an ally of the Dark Jedi known as Jerec and aided him in his quest for the Valley of the Jedi to acquire the vast amounts of force power from the ancient Jedi site.

Desann was born on a world where the Force itself as an alien and mysterious entity. Thus, he was shamed when it was discovered that he was force-sensitive and was forced to traverse alone and isolated until he came across the Jedi Praxeum on Yavin IV one day during his travels. The facility was an academy for future Jedi Knights of the newly established New Jedi Order, a successor to the previous order, and was headed by Luke Skywalker.

​Time as a Jedi

Desann then became a Jedi Padawan and an apprentice of Luke Skywalker and was officially a member of the order. During his time in the order however, Desann gained an infamous reputation as he was known to bully his fellow comrades and even struck down and killed Havet Storm for standing up to him and claimed that he was "too weak" to be a Jedi. Due to his extreme philosophy, Desann quickly fell to the Dark Side of the Force and esacped from the New Jedi Order and the facility on Yavin IV before he could be counseled by his masters.

​Fall to the Dark Side

After defecting from the order, Desann escaped and ran into Admiral Galak Fyyer of the Empire Reborn, a faction bent on restoring the Galactic Empire to its former glory, and the two forged an alliance and Fyyer ended up becoming Desann's new master. Lord Hethrir, later overcame his xenophobia and put Desann in charge as his second-in-command and was put in charge of training the Empire Youths, a group of force-sensitives who were "purified" by the being known as Waru, to become warriors for the Empire Reborn and restore the former empire. During his time as the master of these youths, Desann took interest in the Dark Jedi known as Tavion Axmis and he took her on as his own personal apprentice.

It was also known that during the training sessions, Desann was tasked with modifying recruits weak in the force (all chosen by Hethrir, but for reasons of racial dogma instead of pragmatism) with dark side powers using Artusian Crystals and Sith Alchemy to make them better warriors. To fufil this twisted plan, Empire Reborn forces were sent to capture Artus Prime where the crystals were being mined which resulted in a battle between the Empire Reborn and agents of the New Republic. Much like Jerec, Desann had long wanted to find the Valley of the Jedi as a measn of extracting the vast amounts of Force power that the ancient Jedi site had held for centuries, but only Karan and Jan Ors knew where the valley was located at.

Desann was a proud, conceited, cruel dark Jedi. Because of his talent and strength, he looked down on others and those who were not as strong as he was. Desann, however, was particularly disgusted by weakness and openly despised weak persons or beings. At the same time, he respected those who were really strong and proved their perseverance. He was cruel in the fight, he loved his opponents suffering.

Desann was a talented, strong, very promising dark Jedi who posed a serious threat even to Kyle Katarn and Luke Skywalker.

Desann was a typical aggressive, wild, impatient warrior. He fought in his own lightsaber style, which mixed medium and strong form. The essence of his own form was to attack as strongly as possible at medium speed, but with immediate results. Attacks of this form were almost impossible to defend, it was extremely effective against one or more opponents. Another advantage of Desann was that he had a large and very long lightsaber. He could easily use his lightsaber to attack because of his great physical strength, but it was very difficult to defend with it. 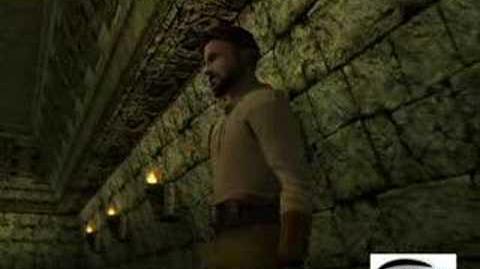