To kill her daughter Malia and regain her power

Corinne, better known as the Desert Wolf, is a major antagonist in Season 5 of the MTV series Teen Wolf. She is a were-coyote and a deadly assassin She was once the lover of Peter Hale and the biological mother of Malia Tate.

She is portrayed by Marisol Nichols who also played Hermione Lodge in the Netflix series Riverdale.

The Desert Wolf was a contract killer who eventually gained the attention of a U.S. Marshall named Braeden who eventually left her job to hunt her down. At some point, she had a relationship with Peter Hale, a werewolf and the younger brother of Talia Hale, a powerful Alpha. Together, they had a daughter, Malia. Her daughter was put up for adoption after her birth and was adopted by the Tate family. For reasons unknown, Talia Hale removed the memory of both mother and daughter from her brother's mind.

The Desert Wolf became determined for unknown reasons to kill her daughter and, when she was still a girl, she shot her adoptive mother's car off the road. This caused the deaths of both Malia's adoptive mother and her younger sister. Malia herself survived and turned into a coyote to survive; she remained a coyote for several years until she was turned back into human form by Scott McCall.

Peter had acquired Talia's claws and used Banshee Lydia Martin to attempt to recover the lost memory. Lydia learnt of the parental link between Malia and Peter but learnt nothing about her mother. Lydia later tells Peter about his link to Malia.

Malia has learned of her link to Peter Hale and breaks into the Hale Vault to learn more about her. She is found there by Peter who tells her that he doesn't know who her mother is but that he has been searching for her since Lydia told him the truth about his daughter. He has learnt only that she goes by the name of the Desert Wolf. Stiles Stilinski, Malia's boyfriend, has started his own search for the Desert Wolf's identity, much to Malia's delight. During the Beacon Hills High School's lacrosse game, Peter approaches Malia and tells her that he has found her mother but while only tell her who it is if she helps him kill Kate Argent. Derek Hale asks his girlfriend, Braeden, if she was really once a US Marshal (her most frequent cover story) and she tells him that she was. However, she left when her hunt for a single being took up all her time: the Desert Wolf.

Malia triggers a repressed memory of the accident as a child and discovers that the Desert Wolf had been the one responsible.Desert Wolf officially makes her first appearance when Doctor Alan Deaton is in Russia, investigating a former lair of the mysterious Dread Doctors. His guide, Vadim, is killed by the Desert Wolf who then takes the veteranarian hostage. She asks him whether the rumour that her daughter is alive is true or not. Deaton lies to protect Malia by saying that he doesn't know anything about a daughter. The Desert Wolf tells him that, should Malia be alive, she would kill her. After the chimera Theo, Braeden, and Malia find Dr Deaton, who has been kidnapped by the Desert Wolf, Theo then betrays Braeden and Malia and was revealed to be working with the Desert Wolf.

He then shoots Braeden and Malia, injuring them and the Desert Wolf gives him something for his pack and he leaves. Malia then fights the Desert Wolf, who tuants Malia about being her family and gains the upper hand and comes close to killing her until the beast shows up breaking through a wall, and Malia frees Dr. Deaton and they all manage to escape. She later reappears and confronts Malia at the lacrosse game while they were trying to find the Beast. While Malia and Braeden are at the formers house, she ambushes and traps the two and they fight for hours while the Desert Wolf taunts her daughter about how she stole her power just by being born. Just as she gains the upper hand while fighting her daughter, Braeden appears from behind and knocks her unconscious. 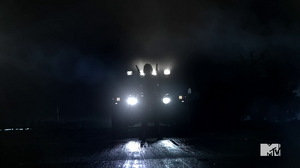