Continue to drain life energy from planets across the universe.

Kill his nemesis Mothra (succeeded).
Kill Mothra Leo and everyone else who stands in his way (failed).

Desghidorah is the main antagonist from the 1996 Toho film Rebirth of Mothra. He's an ancient space monster sealed away and serves as the archenemy of both Mothra and her son, Mothra Leo.

He was portrayed by Mizuho Yoshida.

Desghidorah was a space monster that had descended upon the galaxy over 65 million years ago. He first landed on Mars and sucked the life energy out of the planet, leaving it a barren wasteland. Desghidorah then headed to Earth where he fought against the Elias and their guardians, a race of giant moths known as Mothra, in a brutal battle that ended with his imprisonment. However this battle had also devastated the Earth, wiping out the dinosaurs and many other animal species and leaving only three of the Elias: Moll, Lora, and Belvera, left alive. However, while Moll and Lora became avatars of the last surviving Mothra, Belvera was corrupted by the destruction of her race and sought to one day release Desghidorah onto the Earth once more.

In 1997, a member of a lumber crew managed to uncover the prison of Desghidorah and accidentally took a pendant known as the "Seal of Elias" from it that could allow someone to release and control the terrible monster. Belvera quickly went to recover it, but her sisters were hot on her heels and battled for control of the pendant with Belvera emerging victorious. She immediately went to release Desghidorah and placed the man who had uncovered the monster's tomb under her control. Belvera then had him crash a bulldozer full of dynamite into the structure and Desghidorah was released. The monster began draining energy from the forest until he was confronted by his old enemy, Mothra.

However, the giant moth had just given birth and was very weak, thus the three-headed demon managed to defeat her easily. Feeling the dismay of his mother, the egg hatched, though the newborn larva was undergrown. He immediately went to the battlefield to help his mother and attacked Desghidorah with his silk string. Though this confused the monster for a moment, he quickly recovered and attacked the larva. The mother Mothra quickly leaped to the defense of her child only to be struck away by Desghidorah again. The larva managed to camouflage himself and resumed his attack, but the three-headed monster quickly found him again. However, Desghidorah was distracted by the Mothra mother and drew him to a dam, which she tricked him into destroying. In the ensuing flood, she escaped with her son while Desghidorah was washed away.

Mothra flew out to sea with her child and crashed into the water, sinking to a watery grave below the waves, despite her son's attempts to keep her afloat. While the Elias wept at her death, Mothra's son was eager to deliver swift and brutal vengeance on Desghidorah and began to metamorphize in a chrysalis. Meanwhile, now unopposed, the three-headed space demon cast an enormous black cloud over the island of Hokkaido and continued to absorb energy until he sprouted wings, leaving him ready to ravage the world. However, Mothra's son had evolved into the fully formed Mothra Leo, who engaged Desghidorah once again and managed to defeat him, sealing him back into his ancient prison.

Desghidorah can fire Lava gout energy bolts from his mouths and shoot Hell's Flames from his middle head, fly at Mach 3, generate hurricane winds after developing his wings, and deliver an electrical surge through his teeth. 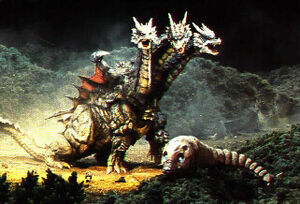 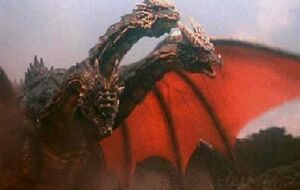 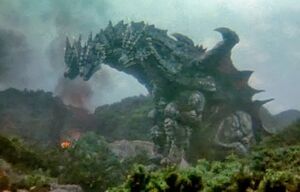 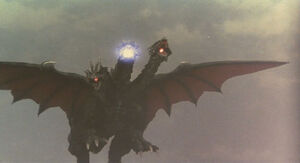 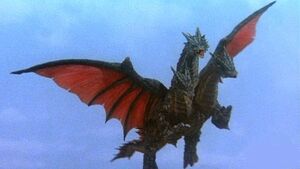 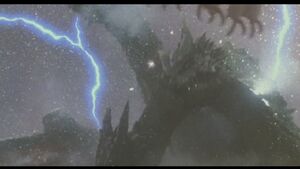 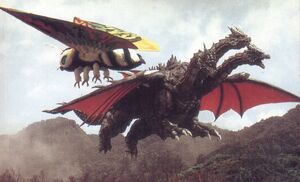