infect and kill as many as possible, while serving Sinestro's will

Sentient Virus
Despotellis is a member of the Sinestro Corps and a villain from the Green Lantern series, a part of the larger DC Multiverse - despite being the smallest Yellow Lantern currently known it is also one of the most dangerous and deadly of the Yellow Lanterns, being a sentient virus capable of killing off entire worlds : it has become the natural archenemy of Leezle Pon, another sentient virus which has allied itself with the Green Lantern Corps and personally fought and defeated Despotellis to avenge the murder of its fellow Lantern and friend, Reemuz.

Following its defeat Despotellis has been imprisoned in the lab of Green Lantern, Soranik Natu, who plans on perfecting a permanent vaccine for the sentient virus - if successful she will effectively kill off Despotellis for good but as of now its full fate is somewhat unknown.

Despotellis was artificially created on the planet of Khondra as an attempt at creating the ultimate bio-weapon, this experiment would prove too successful even for its creators as the virus grew fully sentient and wiped out all life on Khondra in a single day.

Despotellis would find a way off-planet and joined the Sinestro Corps at some point but was not heard of again until the Green Lantern known as Reemuz returned to his home-world to be with his family (having missed his son's birthday by two days and hoping to make it up to him) - instead Reemuz found his entire world a mass-grave, every single life-form wiped out, including his beloved family : a sole Yellow Lantern ring remained as "evidence" of the aggressor.

Reemuz kept this ring with him in hopes its owner would return, unknown to him the malevolent Despotellis had used the ring as bait and infected him from within - a slow, agonizing death befell Reemuz and when he took his final breath the alien virus escaped him and flew into space once more to infect the entire sector.

Despotellis would infect and kill Kyle Rayner's mother, hastening his descent into madness and possession by Parallax, when the Sinestro Corps later invaded Eath Despotellis would infect Guy Gardener and almost killed him but would finally meet its match in the form of Leezle Pon, another sentient virus and member of the Green Lanterns - Leezle Pon was determined to avenged the death of Reemuz, who was a close friend, which it succeeded in doing by battling and defeating Despotellis, in the process it also saved Guy Gardener's life.

Despotellis would then be captured and taken to Soranik Natu's lab, where she keeps the sentient virus in containment and works on a permanent vaccine.

Qwardian (Yellow) Power Ring which give him the following abilities: 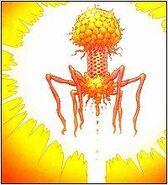 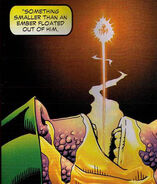 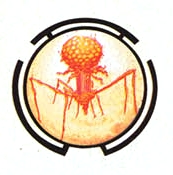 Retrieved from "https://villains.fandom.com/wiki/Despotellis?oldid=3050330"
Community content is available under CC-BY-SA unless otherwise noted.