Sadistic God-Wannabe
Destiny is the main antagonist of the 2017 animated superhero film Justice League Dark. A scientist turned deranged sorcerer who fancies himself a god, with a desire for absolute power and domination of the world. Destiny will stop at nothing to achieve his goals and will gleefully torture everyone with unspeakable nightmares and horror until they submit to his rule. He ultimately acts as both a villain to the main Justice League and the catalyst to forming a sub-branch of those who specialize in fighting both normal magic users and the forces of Hell known as Justice League Dark.

He was voiced by Alfred Molina, who also played Satipo in Raiders of the Lost Ark, Reverend Leland Drury in White Fang 2: Myth of the White Wolf, Snidely Whiplash in Dudley Do-Right, Johann Tetzel in Luther, Doctor Octopus in Spider-Man 2, Bishop Manuel Aringarosa in The Da Vinci Code, Professor Jeffries in Chill Out, Scooby-Doo!, Rippen from Penn Zero: Part-Time Hero, Maxim Horvath in The Sorcerer's Apprentice, Ke-Pa in Kung Fu Panda: Legends of Awesomeness, Lasombra in Hey Arnold!: The Jungle Movie, Mr. Freeze in Harley Quinn, and The Duke in Solar Opposites.

Roughly five centuries ago the man who eventually would become Destiny was described as a man of science who wanted to unlock the secrets of the world. One day he became embittered and decided to study magic and creating an artifact of great mystical power with a fragment of his own soul known as the Dreamstone, upon realizing this had granted him amazing powers and immortality the man took upon the name Destiny. Becoming mad with power Destiny came to the conclusion he was a god and wanted to subject the world to his rule by forcing others to see their worst nightmares often leading to them going insane until all bowed before him. Leading an army of Demons from village to village, Destiny would come into battle with Jason Blood, Merlin, and an army of knights which ended with Destiny's body destroyed with his soul trapped then in the Dreamstone and Merlin bonding Jason with the Etrigan the Demon to save his life. Afraid the Dreamstone's power all but a small fragment was sealed away, eventually the majority of it fell into possession of a trio of Demons.

Destiny's soul survived and plotted to revive himself over the centuries in the small fragment; ultimately, the fragment was found by a desperate Ritchie Simpson who was trying to find a cure for his cancer to which Destiny made the deal to grant him immortality should he reunite the shard with the rest of the Dreamstone. Unfortunately, Constantine had stolen the rest of the Dreamstone already from a trio of Demons thus they'd need to distract all the heroes. To do this, Destiny started to use what magic he could to cause mass insanity leading to people all around the world suffering horrific visions which lead to them unknowingly killing innocents which often were their loved ones. As the heroes fight of some Demons and try to come to understand what is causing these horrifying events, Ritchie under the guidance of Destiny is able to eventually locate the rest of the Dreamstone just as the heroes confront him. Constantine then tries to warn Ritchie that Destiny was merely using him but is unable to do so due to Ritchie being bitter over some event that Constantine did leading to him to get the cancer in the first place. While Ritchie is bragging he's immortal, Destiny immediately proves Constantine right and decides to use the Dreamstone along with Ritchie's body to remake his own much to everyone's despair. Destiny proudly declared he was reborn and continued to terrorize the world and feeding off others agony to increase his power until the world would be his to rule as a living divinity, with his great power Destiny was able to take on all the heroes for a time until ultimately killed when the Dreamstone was destroyed after Constantine and Deadman with help of Jason Blood, who ends up separated from Etrigan, slay his body. With the Dreamstone destroyed Destiny no longer had an anchor to the mortal world thus his soul was unable to remain leading to him finally being banished to Hell for his crimes, quickly followed by his former and unwilling host Ritchie.

When he retained his normal human form, Destiny was muscular man who had pale grey skin, black facial hair and brown eyes while wearing a dark purple hooded cape and armor with a diamond shape crest in the center of his chest. When he regains his physical form his clothing remains mostly identical and retains a muscular build but his skin becomes white and face appearing more like a skull with his eyes being a glowing red, instead of the Dreamstone being part of his staff it is now fused to his chest.

Destiny is a sadistic megalomaniac that takes joy in the suffering he causes to all those around him with the ultimate goal of obtaining absolute power over the Earth for all eternity. Despite having a God complex it is clear Destiny is a genius and manipulative individual who will wait for the best moment to set his plans into action with how he took his time in conquest centuries before and waiting until he could regain the power needed to be fully revived. However one should never trust Destiny as he is shown to not care for anyone other than himself and will quickly dispose of minions should they fail or be of no further use to him and his goals.

Without a doubt Destiny is powerful sorcerer who has been show to be able to cause insanity to many people around the world even when he is at his weakest, cast illusions, create nearly indestructible force fields, summon Demons under his command and cast a variety of powerful spells with seemingly little effort. In the past it is shown Destiny was a strong individual and capable of summoning weapons in an instant to kill a skilled knight. Even fatally wounding to outright destroying his body will not finish him as his life is tied to the Dreamstone making him in a sense immortal with a way to return until it was destroyed. That said it seems most of his power is directly connected to the Dreamstone as he is desperate to retrieve it moment before his final death indicating that once it was separated he couldn't use his magic to its fullest. 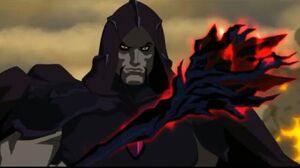 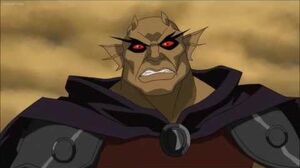 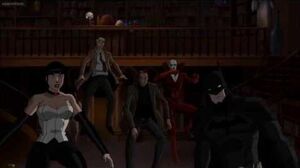 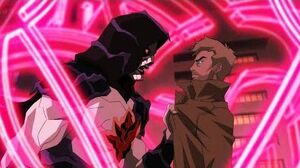