NOTE: This article is about the incarnation of Destro from the live-action film series. The mainstream version can be found here: Destro.

Designing weaponry for both NATO and Cobra.

Avenge Clan McCullen by using the nanite to destroy the Eiffel Tower (succeeded).

Conquer the world by detonating three nanite warheads and have the world turn to the most powerful man in the world (failed).

Laird James McCullen, also later known as Destro, is a recurring antagonist of the G.I. Joe film series, serving as one of the two main antagonists (along with Cobra Commander) of G.I. Joe: The Rise of Cobra and a minor antagonist of G.I. Joe: Retaliation.

He is the head of M.A.R.S. Industries, however later on Rex Lewis originally known as "The Doctor" wrests control of the organization from him and assumes the title of "Cobra Commander" renaming it COBRA.

He was portrayed by Christopher Eccleston, who also played Raymond Calitri in Gone in 60 Seconds, Henry West in 28 Days Later and, Malekith the Accursed in Thor: The Dark World.

McCullen is introduced in the film as a philanthropic scientist and businessman who is head of M.A.R.S. Industries which is researching the nanomites. He sends out four new nanomite warheads to a special location. Unknown to the military and the G.I. Joes, he sends his Neo Viper henchmen and the Baroness to retrieve the case for his own evil plans. He is next seen in a holographic call to the G.I. Joes to examine and make sure that all three of his nanomite warheads are safe and secure. Later, he orders the Baroness and his ninja assassin Storm Shadow to retrieve the case. His assistant Zartan states that nothing ever works out. But McCullen assures him that this problem is one that they will eventually fix. His main scientist, the Doctor states that he has created several Neo Viper henchmen and sends a small squad to go with Baroness and Storm Shadow to the G.I. Joe pit. McCullen next sees three missiles that he says will make the world turn to the most powerful man in the world.

Later, McCullen sends Baroness and Storm Shadow to Paris to weaponize the warheads and test one on the Eiffel Tower. He wanted to detonate one on the warheads on the Tower so that the French will never forget what they did to his family. He then observes the Doctor's experiments on Zartan to complete Phase 1 of his master plan to turn him into the President of the United States.

Afterwards, McCullen orders Storm Shadow to launch the three remaining warheads into the sky so that they could detonate Washington, Beijing and Moscow. He later shares a kiss with Baroness, much to Duke's disappointment. He then has the Doctor prepare for another procedure, this time on Duke. He is next shown in a flashback scene where the Doctor (revealed to be Rex Lewis) investigates the work of M.A.R.S. scientist Dr. Mindbender. e then witnesses that Baroness has ignored her nanomite programming for Duke because of her love for him. He then tries to use a flame thrower against Duke but instead his attack backfires in which he is severely burned and left physically scarred as a result, Rex then evacuates the facility, bringing McCullen with him. Due to being incapacitated, McCullen loses command of M.A.R.S. Industries as Rex Lewis assumes the title of Cobra Commander at the climax of the film and wrests control of the organisation from McCullen, renaming it COBRA with himself as its leader. He is then given an injection of nanomite technology by Rex that heals his scarred face, though it also changes his face into hardened silver-like metal. At first McCullen deems it as his heir succession to the line of McCullen's but Cobra subsides it and dubs him Destro, as a result of this, McCullen is outraged by Cobra's remark and what he has done to him, attempting to attack him but due to the mind-controlling ability of the nanomites he is restrained and forced to be obedient to Cobra Commander. After this, he is apprehended with the Commander by the G.I. Joes and taken to a secret prison.

Destro is seen when Storm Shadow breaks into the prison to free both him and the Cobra Commander, as part of Cobra Commander's true plan to subdue the world with the threat of satellites. However, Cobra Commander orders for Destro to be left behind, and Destro remains in prison presumably for the rest of his life or he perishes in the explosion of the prison because of the Director Nigel James. 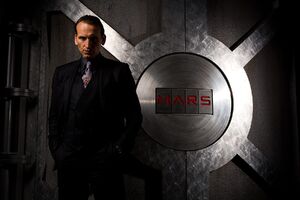