Conquer the world through terror and destruction.

Destron, alternatively spelled Deathtron, is the main antagonistic faction of Kamen Rider V3. It is an international organization formed from the remnants of Shocker that is bent on conquering the world through terror and destruction.

Destron was formed under the guidance of the mysterious Great Leader by surviving members of Gel-Shocker. Although Destron had branches in every country and sought to dominate the entire planet, they stationed their main headquarters in Japan, with Japan bring Destron's primary target. Initially the Inhumanoids of the Mechanical Army followed the orders of the unseen High Destron without any direct supervision, but after the repeated failures of the kaijin, the High Destron summoned Doktor G from Destron's German Division to take charge of the day to day operations of Destron's Japanese Division.

The Destron Combatmen are the grunt fighting force of the organization, created through cloning. They are similar to the Combatmen of Shocker. They wear black jumpsuits adorned with white markings of the Destron scorpion logo. The weapons they wield vary depending on the executive they serve under, with those serving Doktor G wielding knives while those serving Baron Fang used fang-shaped daggers. They also came in several specialized variants, such as the cultists who wore black robes and accompanied Archbishop Wing or the elite bodyguards clad in military officer uniforms who served as guards to the Destron Leader.

Researchers who serve in the Science Division of Destron, headed by Joji Yuki, and are responsible for all of the surgeries Destron performs on test subjects to convert them into Inhumanoids. They wear uniforms similar to the Combatmen but white with red markings. Unlike the Combatmen they all appear to be normal humans. Despite this, they were all extremely loyal to the head of the science division, to the point where they even risked their lives to save Yuki when he was about to be executed by Marshal Armor on (falsified) charges of treachery against Destron.

Unique to them as an evil organization, within Destron is a sect of cultists versed in mysticism who are responsible for all of the black magic rituals conducted by the organization. They wear black robes with KKK-like pointed hoods.

The Destron Inhumanoids are the monsters of the Destron organization, sorted into several different divisions each commanded by a Destron executive. They are typically combinations of an animal and a weapon or other inanimate object.

Destron's Inhumnoids are sorted into different groups: The Mechanical Army, the Fang Tribe, the Wing Unit, and the Armored Division.

This is the Destron Group first used by the Great Leader and later led by Doktor G. Doktor G creates the monsters under his command using black magic and technological science:

This is the Destron group led by Baron Fang. Its members were cultists practicing an evil magic called Doovoo (not to be confused with Voodoo magic):

This is the Destron group led by Archbishop Wing. The Wing Unit is an ancient cult of vampires:

Marshal Armor used several reconstructed Kaijin to ambush V3 in the Destron headquarters. They were easily defeated, but V3 ran into a dangerous trap right afterwards.

Kamen Rider The First/The Next 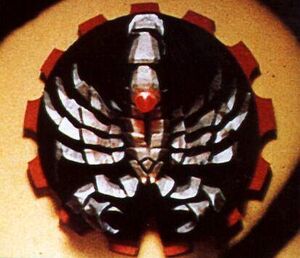 The Destron speaker through which their Great Leader issues orders. 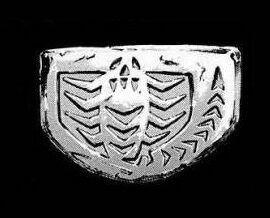 The Destron belt buckle in the manga. 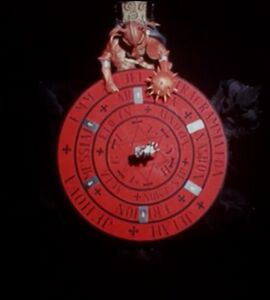 Marshal Armor meeting with five other Destron executives to discuss the trial of Joji Yuki.