Destroy everything in its path.

The Destroyer of Worlds is one of the Arcade Games that Mordecai and Rigby discovered in the episode "Just Set Up The Chairs" of the cartoon series Regular Show, and also the main antagonist of the same episode. He appears to be nothing more than a pixelated floating devil head.

He was voiced by Mark Hamill.

Mordecai was unwilling to touch an old video game machine because of both the "out of order" sign on the front and the note was apparently written by Skips, warning them not to connect the red wire with the blue wire. Rigby, being the idiot that he is, connected them anyway, releasing a giant demon head that began to float around and set everything on fire. Destroyer of Worlds was later defeated by Rigby, who was just "mashing the buttons" on a system created by Skips in which a giant protagonist was created by joining all the other Arcade Games together.

He is later one of the villains resurrected by Garrett Bobby Ferguson Jr. in Exit 9B, he is seen teaming up with Susan (in her giant form), but is destroyed by the same protagonist in the first episode he appeared in.

He can shoot fire from his eyes and floats in midair. He seems to be invulnerable to anything that isn't digital (an example of this is when Rigby tosses a rock at him, as it bounces off of him and he gets mad). 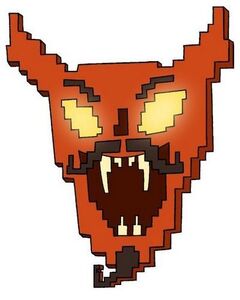