Bearing her grudge against Asuka.

Destruction Messenger Jannu is a female warrior of the Evolians and a major antagonist turned anti-heroine in the television series Bakuryuu Sentai Abaranger. She is the third to wield the Cursed Armor. She harbors a grudge towards Asuka for unknown reasons.

She is later revealed to be Asuka's wife, Mahoro, who was brainwashed by Dezumozorlya.

She was portrayed by Eri Sakurai.

In the battle at Dezumozorlya's Palace, Dezumozorlya tricked her into believing that Asuka has abandoned her for another woman and implanted his DNA into her child, causing its soul to separate into Lije and Kasumi.

Jannu was restored back to her original self when Asuka chose to wear the Cursed Armor once more.

When the Abarangers found her, they discovered that she had lost her memory. She then got a job working in the Dino House and befriended the Abarangers. However, her memory returned when she learned that Asuka was wielding the Cursed Armor. Upon learning this, Mahoro re-assumed her identity as Jannu in order to free Asuka from the armor, though she also chose to go undercover within the Evolian due to her unfinished business with Lijewel.

Mahoro continued to assist the Abarangers in secret until Dezumozorlya discovered her treachery. However, she was rescued by Asuka and Ranru Itsuki, later returning to Dino Earth with Asuka to start their lives anew. At the end of the final episode, a family resembling Asuka, Mahoro and Lije entered the Dino Curry much to the Abaranger's surprise. 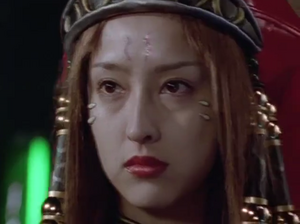