The Beast of Beauclair

The Butcher of Beauclair

The Witcher 3 Expansion Blood and Wine

Dettlaff van der Eretein is the central antagonist of the Blood and Wine Expansion of The Witcher 3: Wild Hunt.

Used by his lover Syanna, he became the serial killer known as the Beast of Beauclair, killing Syanna's old enemies to seemingly ensure her freedom. When Geralt was invited to Beauclair to kill the beast, he realised that his opponent was in truth a higher vampire.

Dettlaff arrived in the plane of Geralt's world during the Conjunction of Spheres. In contrast to other vampires, Dettlaff was unable to comprehend and adapt to his new situation. Thus, he shunned humans and lived with other, lower vampires. However, Dettlaff did not hate humans and even helped those who were friendly towards him.

At some point he ventured through the ruins of Castle Stygga where he found the higher vampire Regis, who had been molten by the magic of Vilgefortz. As higher vampires were not so easily killed, Dettlaff reanimated Regis with his own blood and thus formed a deep blood-bond between the two. Dettlaff nursed Regis back to health.

Dettlaff also met a woman, Rhena, and fell in love with her. Unbeknownst to him, Rhena was in truth Sylvia Anna, the exiled sister of the Duchess of Beauclair. Syanna, bent on revenge for her exile, manipulated Dettlaff's feelings towards her. She staged her own abduction and later sent Dettlaff a letter, claiming that the kidnappers of "Rhena" would torture the woman should Dettlaff not follow their instructions. The letter also told Dettlaff that he would need to kill five people in order to get Rhena back unharmed. In the following weeks, associates of Syanna brought letters to Dettlaff in which the names of the victims and the way Dettlaff was to kill them were detailed. In order to save Syanna, Dettlaff agreed to kill the five victims. After murdering his first two victims, the citizens of Toussaint gave the unknown killer the name 'Beast of Beauclair'. Duchess Anna Henrietta also employed witcher Geralt of Rivia to hunt down the beast.

While Geralt travelled to Toussaint, Dettlaff befriended Count de la Croix, who helped him out against some thugs. However, Dettlaff was later handed another letter in which de la Croix was named the third victim. Although feeling guilty for murdering his friend, Dettlaff killed de la Croix in order to save Rhena. After tossing de la Croix' corpse into the river, Dettlaff broke down and, full of anger and remorse, ripped off the hand he used to kill de la Croix. De la Croix' corpse and Dettlaff's hand were brought to Corvo Bianco were a bruxa tried to retrieve it. The bruxa was caught in the act and killed by Geralt.

While investigating the murders, Geralt finds out that the next victim of the beast will be Milton de Peyrac-Peyran. He tracks down Milton to a greenhouse in the palace gardens of Beauclair but upon entering the house, finds that Dettlaff has already killed Milton. Dettlaff seemingly attempts to flee but in truth lures Geralt into a warehouse inside the city. There, he confronts Geralt, stating that he is almost done killing and cursing Geralt for killing the bruxa. He and Geralt then fight. During the battle, Dettlaff is about to rip Geralt apart but is stopped by Regis who jumps in front of Geralt and is impaled by Dettlaff's claws instead. Regis tries to calm Dettlaff but Dettlaff is too angry to listen. Instead, he transforms himself into smoke and flies out of the warehouse, only moments before the arrival of Anna Henrietta's guards.

After leaving the scene with Regis, Geralt is told by his old friend that Dettlaff is not an evil person. Regis tells Geralt about Dettlaff's past but is unaware that Rhena has been captured. When the two find out that Dettlaff is blackmailed and thus forced to kill the people of Beauclair, Regis attempts to convince Geralt to help Dettlaff. They also attempt to save Rhena from her kidnappers so that the kidnappers would have no further influence over Dettlaff.

Eventually, Geralt, accompanied by Dettlaff, confronts whom he believes to be Rhena. Upon meeting her however, he realises that Syanna and Rhena are one and the same and that Syanna has only been using Dettlaff. When revealing this to Dettlaff, Dettlaff at first doesn't believe it. Realising that he is to furious to act reasonable, Dettlaff demands that Rhena is delivered to him at the old vampire fortress Tesham Mutna in three days. Before once more disappearing in a cloud of smoke, Dettlaff threatens to slaughter everyone inside Beauclair should Rhena not arrive.

As Anna Henrietta is unwilling to surrender her sister, Geralt and Regis try to track down Dettlaff for a week. However, they are unable to find him. When they return to the palace of Beauclair to report to Anna Henrietta, they are disturbed by a mortally wounded palace guard. From a terrace overlooking the city, they see that an army of vampires is attacking the city and slaughtering the citizens. To stop Dettlaff's vampire horde, Geralt can decide to either surrender Rhena to him or to track him down with help of an ancient vampire.

If they choose to seek the aid of the vampire, the vampire calls Dettlaff to Tesham Mutna. Unable to ignore the vampire's call, Dettlaff arrives at the fortress. In his rage, he tries to attack Geralt but Regis intervenes and fights Dettlaff. The two vampires battle and Regis is eventually smashed into a brick wall. Geralt continues the fight with Dettlaff, who after taking damage transforms into a skeletal vampire beast. After Geralt defeats him, slicing him in half in the process, Dettlaff's vampire powers start regenerating him. As only a higher vampire can kill another higher vampire, Regis steps in and kills his old friend, of whom he now knows that he can never completely adapt to the new world, for good. 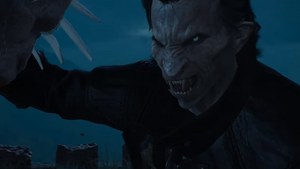 The Beast of Beauclair 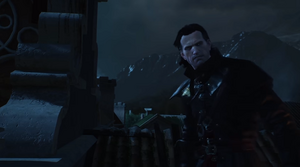 Dettlaff is summoned by the Unseen Elder 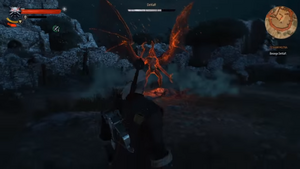 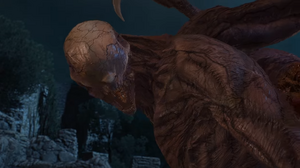 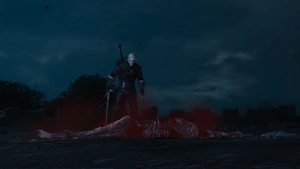 Dettlaff lies slain
Add a photo to this gallery

Retrieved from "https://villains.fandom.com/wiki/Dettlaff_van_der_Eretein?oldid=4040497"
Community content is available under CC-BY-SA unless otherwise noted.