Villains Wiki
Register
Don't have an account?
Sign In
Advertisement
in: Deities, Harbinger for Rebirth, Leader,
and 31 more

Member of the Eight Generals (formerly)

Leader of the Seven Deities
God of lightning

Kill off all the Gohmas permanently.
Kill Asura and anyone who try to stop him (all failed).

Deus is the central antagonist of the video game Asura's Wrath. He is the God of Lightning, the King of the Gods, and the leader of the Seven Deities.

He was voiced by Masashi Ebara in the Japanese version and  the late David Pizzuto in the English version.

After they once again defeated the Gohma, Deus murdered Emperor Strada and let it appear like Asura killed him. After this, Asura was branded a traitor, his wife Durga was killed,  and his daughter Mithra was kidnapped to trigger Deus' master plan: "The Great Rebirth". Enraged at the murder of his beloved wife and the betrayal of his comrades, Asura faced Deus, but he was no match for him. Deus promptly banished Asura to Earth to keep him from interfering with his plans to create a new world.

Deus was a prideful and arrogant demigod commander who was also ruthless and hungry for power and control. He was an extremist who believed that a good end justified the means no matter how terrible the means were and harbored a severe God Complex and Messiah Complex. To this end, he desired to stop the eternal conflict between the Demigods and the Gohma and fight against fate, as he stated: "That is the duty of a god". He also despised the Gohma and was willing to destroy countless innocents in order to eradicate them permanently and had planned to create a new world and shape an ideal utopia in his own image

However, despite this dark side of his, Deus was once an honorable Demigod who truly wished to save the world, but his delusional pride and extremist views made him drunk with power, corrupting his judgement and leading him to orchestrate heinous actions. Although Deus had the Emperor of Shinkoku Trastium murdered, he had tried to get the Emperor to listen to him and only decided to remove him because the Emperor was too complacent with the fate of the demigods and temporary peace, showing at least in the early days, he would have been fine with remaining a warrior had the Emperor agreed to include his suggestions. He was also righteous as he refused to only sit on a throne and rule while having the others carry out his goal, preferring to continue to be a warrior even while sitting on his throne. For all his willingness to use innocent souls for power, Deus wasn't devoid of remorse over it, as he was enraged when Yasha commented on the possibility that Deus wanted power and slaughtered them to do it, and he did value the mantra energy caused by their sacrifice, agreeing with Yasha that it is more important than taking out Asura and berating and punishing Olga for her attempt to use the Brahmastra to defeat Asura. Due to his warrior mindset, Deus and Yasha had the closest relationship, with Deus having trained Yasha and constantly comforting him over his guilt of having to do what must be done. Even after Yasha betrayed him, it was indicated that Deus didn't want to kill him, as he offered Yasha a chance to remember the cause and join him once more.

Being the leader of the Seven Deities, Deus is the strongest and most skilled of them all, with all of them acknowledging his superiority, even Augus, who had to draw his sword against him and still could not defeat a holding-back Deus. 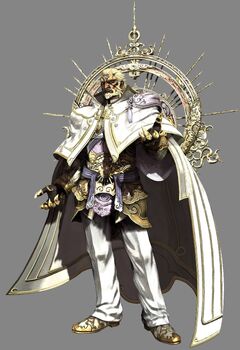