Lompop was an ancient man-eating bounty hunter who, due to belonging to the Shani species, had lived for centuries and been active since the High Republic Era. She had a storied personal relationship with the crime lord Jabba the Hutt. Deva owed the Hutt a debt of blood, and every time she tried to pay it off Jabba would find a new way of making her work invalid.

Lompop eventually grew tired of working as a bounty hunter, instead opting to work as an affluent information broker. However she was forced out of retirement by Jabba, who continued to give her jobs that reaped no reward. Overtime she began to resent Jabba, and began conspiring with the criminal syndicate called the Crimson Dawn to kill the Hutt.

As a member of the humanoid Shani species, Lompop resembled humans in many ways although there were some key differences. Rather than hair topping her head, she sported a Mohican of vibrant, multi-colored feathers. Her scaly reptile skin was bright green and her snake-like eyes were bright yellow. She was considered attractive by multiple species, and she often used her beauty to further her objectives.

While on mercenary work, Lompop wore a practical outfit consisting of a skin-tight red and pink top, ripped maroon trousers, a black leather jacket, and metal gauntlets. She also wore various pouches containing equipment she needed for her bounty hunting work. While off duty, she tended to wear elaborate light blue robes with pink decorations, an abundance of accessories, and a white turban covering her feathers.

During the Imperial Era, Lompop was invited to Jabba's Palace on Tatooine by the Hutt crime lord. Although they initially enjoyed festivities, Deva knew Jabba hadn't summoned her to socialize. The Hutt explained that he wanted her to hunt down her ex-boyfriend Jarm Brock, who had infiltrated the settlement Mos Entha with armed enforcers and disrupted Jabba's slaving operations there. Jabba believed Brock was working on the orders of the Grand Hutt Council, and wanted Lompop to accompany his best bounty hunter Boba Fett in sending a message.

Hoping that her debt could finally be repaid, Lompop accepted the job and headed to the outskirts of the town with Fett in tow. By surveying the town Lompop discovered that Brock wasn't working for the Hutt Council, as there were Soikans present among the enforcers guarding the settlement. In light of the new information, Jabba ordered Fett and Lompop to bring Brock in alive for questioning. Deva followed Fett's lead, who headed down to the town's bar to interrogate the barkeep.

However before they could gain any information, Brock arrived with his enforcers and began attacking the two bounty hunters. Lompop created an opening for herself and Fett, allowing them to escape the bar. Fett then used his jetpack to pursue Brock, who was escaping on a speeder. As Boba apprehended Jarm, Lompop dealt with the remaining enforcers. Hoping to interrogate Brock alone, Lompop used a poison blade to incapacitate Boba Fett. Jarm revealed that he was working for Crimson Dawn, a crime syndicate that had been hoping to turn Jabba against the Hutt Council.

Not wanting the Hutt to learn what Jarm had told her, Lompop ate Brock and returned to Jabba's Palace with the unconscious Boba Fett. Although Deva believed she had finally repaid her debt, the Hutt denied her claim as she had killed Brock rather than captured him. Upset with the Hutt's treatment of her, Lompop claimed that it was Bokku of the Hutt Grand Council who had sent Jarm, therefore indirectly helping the Crimson Dawn's machinations. 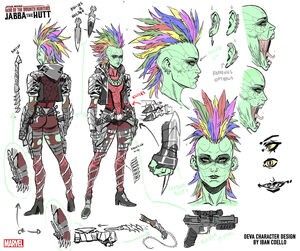