NOTE: This article is about the incarnation of Devastator from the Transformers live-action film series. The mainstream version can be found here: Devastator.

Shoot lasers from his right arm

Aid Megatron and The Fallen in unearthing the Sun Harvester for them to use in making more Energon (all failed).

Devastator is a supporting antagonist of the 2009 film Transformers: Revenge of the Fallen. He is a colossal Decepticon who is the combined form of the Constructicons. He has the Vortex Grinder, the ability to expand his mouth and vacuum everything in his mouth.

He was voiced by Frank Welker, who also voiced the Green Death.

Devastator appears in the battle of Egypt where he is formed by the nine Construction vehicles in Egypt. Once formed, he begins to suck in everything in the construction site, trying to destroy Autobot twins Mudflap and Skids. Mudflap is then sucked into Devastator's mouth, holding on just out of reach of the grinding gears.

Although eaten, Mudflap breaks out of Devastator's mouth by blasting a hole in his face. Shortly after, he immediately begins to climb a pyramid that the Sun Harvester is underneath.

Once at the top, Devastator proceeds to unearth the Sun Harvester from the pyramid built around it before being destroyed by an US Navy experimental rail gun called in by former Sector 7 agent Seymour Simmons.

Transformers: Revenge of the Fallen: The Game

Devastator appears in the game adaptation of the second film. He is not playable in either sides but is encountered in the Autobot campaign as the final boss. He is summoned in Cairo after the Autobots defeated Megatron and Starscream. Major Lennox's NEST team and the local military forces were unable to hold off the giant Decepticon and ended up supporting the Autobots in defeating him. NEST helicopters provided invaluable assistance by labeling Devastator's weak spots such as his back-mounted missile launchers, hip cannons and arm-mounted guns before finally hitting his head-mounted armored node, which the Autobots must hit. After he is defeated, Devastator soon collapses in the streets of Cairo.

Devastator makes an appearance in the Universal Studios attraction Transformers: The Ride as one of the encountered Decepticons. He assembles himself on the streets of Chicago and activated his Vortex Grinder to capture Evac but the force of his Vortex Grinder sends the latter over his head to the other side. As Evac drives away with the aid of Sideswipe, he is attack by Bonecrusher, whom Sideswipe fended off. After defeating Bonecrusher, Evac is again sucked into Devastator's Vortex Grinder but luckily was able to emerge by activating his battle shields, saving him.

Devastator makes a brief appearance in HISHE's parody of Transformers: Revenge of the Fallen. He is only shown slacking off and has a censored bar on his waist while Mudflap and Skids looked at him. Mudflap replied "Man, Decepticons are so wrong.". with Skids also stating "Yeah, glad we Autobots don't do anything offensive.". The railgun that was supposed to kill him killed The Fallen instead. 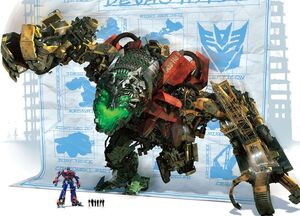 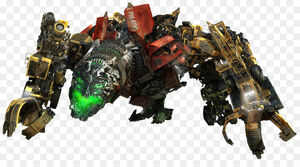 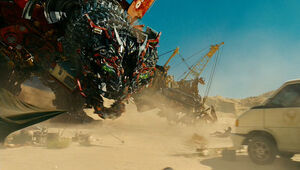 Devastator about to attack

Devastator using his Vortex Grinder, dragging Mudflap in the process 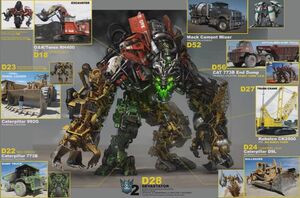 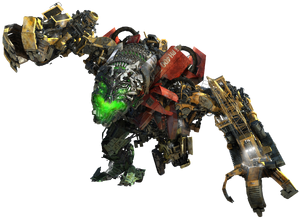 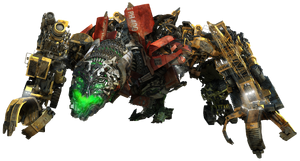 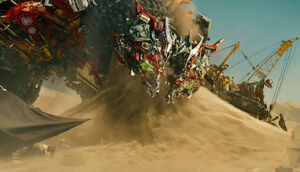 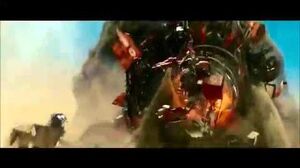 Transformers revenge of the fallen- Devastator VS Mudflap And Skids