Villains Wiki
Register
Don't have an account?
Sign In
Advertisement
in: Enigmatic, Ferals, Villains of Folklore,
and 11 more

Enigmatic Ferals
Devil Monkeys are a subtype of the Bigfoot and one of many primate cryptids from North American folklore, though variants of them exist all across the world. They are notable for being far more aggressive, malicious, and feral than the usually peaceful Bigfoot of North America, and are said to resemble baboons or other tailed primates, rather than the more bipedal form taken by Bigfoot.

Devil Monkeys are said to have horrible screaming sounds and wild behavior, attacking people on sight and causing widespread panic. This makes them an entirely different beast from most other primate cryptids, in that they seem to actively seek out humans and are considered a major threat if encountered.

They may sport more unusual traits such as glowing red eyes, abnormal size, incredible strength, speed, and even ghostly traits, such as causing mist or shadows to manifest wherever they go, but for the most part, they are seen as a kind of vicious "wild man" rather than a truly supernatural entity.

Due to the wild appearance, the heightened aggression, and loud noises, skeptics believe that most Devil Monkeys are simply escaped baboons or similar monkey species that have managed to breed in the wild, much as some big cats have reportedly done in other areas of the world (giving rise to tales of Alien Big Cats).

More fanciful tales see the Devil Monkeys as extra-dimensional visitors, evil spirits, aliens, or an aggressive cousin of the Bigfoot, which would make them North America's version of the Yeti.

In the 1970s, more reports of Devil Monkeys came to pass with some claiming the creatures were mutilating local livestock. In all these accounts, the beasts were reported to have strange features such as bushy tails, long snouts, and abnormal aggression, all of which made the cryptozoologist, Loren Coleman, convinced that the Devil Monkeys were a very real phenomena and a very different creature from Bigfoot, or similar primate cryptids of the time.

In 1996, a woman by the name of Barbara Mullins was driving along Louisiana's Highway 12 when she purportedly noticed a large mass sprawled out on the side of the road. She pulled her vehicle over and got out to investigate, but rather than the dead dog she had been expecting to see, she saw that it was in fact a creature similar in appearance to a baboon, which was about the size of a large dog and had thick shaggy hair, pointed ears, and ape-like arms and legs. Mullins managed to get photographs of the mysterious carcass, which have gone on to stir much debate and controversy as to what they actually show.

As is common with most paranormal events, tales of Devil Monkeys are not as common as they were in the past, and little evidence has surfaced on their existence. Due to the widespread access to cameras via phones and other devices, many skeptics see the lack of evidence as a sign such stories are false. However, this does not mean the phenomena is completely dead, and even to this day, there are some reports of Devil Monkey sightings or attacks, mostly in remote areas, and much like Bigfoot and other cryptids, it is nearly impossible to fully know either way if these stories are true or fiction. 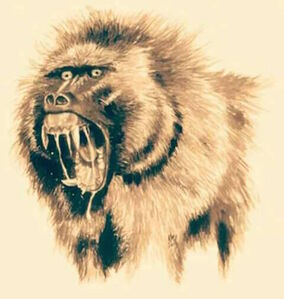 A drawing of a Devil Monkey's face.