Each series possess their own unique attacks and powers

The Devil Series are recurring antagonists from the Mega Man franchise, always appearing as bosses in the final stages. They were originally created by Dr. Wily to serve as guards for his fortresses, though a few models have appeared far beyond in the future. Their main characteristic is being made of a slimy substance which is controlled by a robotic eye. The slime makes up most of their bodies and can be changed into different forms, being immune to attacks while the eyes are the only weak points. They also seem to share a weakness to electric-based weapons.

The Yellow Devil appears in Super Smash Bros. for Wii U and Super Smash Bros. for 3DS as an enemy encountered on the Wily Castle stage. It attacks by splitting into parts that fly across the screen, shooting lasers out of its eye when it reforms. It can be damaged by attacking its eye, and should it be defeated, it will create an explosion that harms everyone but the player who dealt the finishing blow. It will only spawn if there are four or fewer fighters on the stage.

Defeating it grants a large boost in the player's stats. If it is not defeated within the time limit, it will warp away to another part of the map, but retains all prior damage taken.

The Yellow Devil returns in Super Smash Bros. Ultimate as an enemy on the Wily Castle stage, although it is possible to prevent it from attacking by turning off the Stage Hazards. It also appears as a neutral primary spirit, summoned using cores of Waddle Doo and Diskun. It only has one support slot and its ability decreases the player's speed.

The Yellow Devil is the original Devil robot and the most recurring one, the others being variations of it. It is the first fortress boss that fights Mega Man in the original game, where its main attack is to separate its own body into various blocks which will fly to the other side of the screen, where the Devil will reform. Once it reforms, it will open the eye and shot a laser, giving the player a small opening to hit it. Its weakness is the Thunder Beam, since it loses control over its body if Mega Man zaps it in the eye.

In the arcade games Mega Man: The Power Battle and Mega Man 2: The Power Fighters, the Yellow Devil is given various new abilities, now walking and jumping around the screen, shooting eye beams, sending bouncing blocks and squashing the player with its hand.

The Yellow Devil MK-II is an upgraded version of the original Yellow Devil, appearing as the second fortress boss in Mega Man 3. It uses the same attacks as the original, but can also group its blocks to make them bounce to the other side. Its weakness is the Hard Knuckle.

The Dark Moon is the boss in the intermission stage from Mega Man V, being sent by Terra to defeat Mega Man and avenge his fallen comrades. While he uses the same strategy as the previous Devils, the top blocks will bounce around instead of flying forward, as the are too high to hit the player normally. Its weakness is the Photon Missile.

The Green Devil appears as the third fortress boss in Mega Man 8. The arena where he is fought has holes on the floor, which it uses to dissolve its body to launch his attacks, which include making spikes under Mega Man's feet and creating a huge wave of goo. It is also capable of using the traditional separating attack, though it rarely uses it. Its weakness is the Thunder Claw, but the player must peel back the goo protecting the eye to damage it.

It returns in Mega Man & Bass as the boss of the intro stage, having been rebuilt by King and used to cover his escape from the Robot Museum.  The strategy for defeating the Green Devil is the same here as in Mega Man & Bass, but its attacks are much simpler.  This time around, the Green Devil is stationary for the entire battle and can only attack by tossing little globs that either bounce around or roll on the ground.

The Twin Devil appears as the third fortress boss in Mega Man 9. It is comprised of two separated bodies, which are controlled by the same eye. While it can only use the separation attack, the battle is made tougher due to one of the bodies being out of reach, and the eye can only be damaged while moving between the bodies. Its weakness is the Black Hole Bomb.

The Block Devil appears as the third fortress boss in Mega Man 10. Its body is made up of portions of the walls and floor of the arena. After its body is formed, it will shoot pellets before dismantling its body again, after which the eye will stay out of reach and make the blocks to move around. Its weakness is the Thunder Wool, but only indirect hits from it will cause considerable damage, so the player can use the Rebound Striker as an alternative.

The Yellow Devil MK-III is a new model of the Yellow Devil that appears as the first fortress boss in Mega Man 11. Aside from the similar abilities to the original Yellow Devil, it is also equipped with a Speed Gear allowing itself to split apart into smaller copies of itself that drop in a standard pattern and only with the one with the eye can be hurt. Its weakness is Chain Blast, but it is easier to use if Mega Man uses his Power Gear to use the weapon in its enhanced state.

The Shadow Devil appears as the first fortress boss in Mega Man X5, being the first Devil robot to appear outside of the classic series. It is considered the toughest of the Devil bosses and one of the hardest bosses in the entire franchise. It will use the separation attack and reform, after which its eye will open to shoot, though the eye can appear in any portion of its body. When its body starts separating, it will leave an outline where it was, which will cause massive damage if the player touches it, sometimes killing instantly. After it loses some health it will start interrupting the separation move midway and switch the two halves before finishing the maneuver. When it is low on health the Shadow Devil will transform into the Wily Machine 6 and attempt to crush the player. Its weakness is the Tri Thunder.

The Rainbow Devil appears as the boss of the Neo Arcadia Tower mission in Mega Man Zero, reappearing again in Mega Man Zero 2 as the first fortress boss. Having a body of liquid metal controlled by a Pantheon head, its attacks include a stretch-punch, spinning its body to launch small globs over the place, turning into a monster head to bounce around and crawl forward an attempt to grab Zero and choke him. Its MK-II appearance in the second game is identical to the first game, except it moves faster and its globs are now explosive.

The Ra Devil (originally called New Yellow Devil) is the final boss from the FMV game Super Adventure Rockman, being created by Ra Moon using the blueprints of the original Yellow Devil on Dr. Wily's laptop. It doesn't have any specific weaknesses. After the fight, as Mega Man is unable to defeat it, Wily's robots all give their energy to Mega Man, who attacks Ra Moon directly and destroy it. 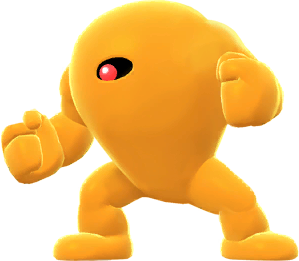 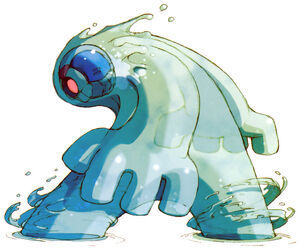 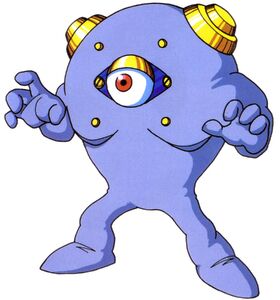