Have Michael help Solomon Richards (all succeeded).
Get rid of the influential movie "Meltdown".
Have Michael's family killed out of revenge for his lawyer's death.
Have Michael De Santa killed.
Make more money (all failed).

He is an influential billionaire and a ruthless business tycoon who runs numerous enterprises in the fictional city of Los Santos, many of which include criminal activities. He is the overall archenemy of Franklin Clinton, Michael De Santa and Trevor Philips, with a particular emphasis in Michael. Weston serves as the main antagonist of Michael and Franklin's storylines, and the secondary antagonist of Trevor's storyline.

He was voiced by Jonathan Walker.

Weston initially is seen working with corrupt F.I.B. agent Steve Haines, torturing a seemingly innocent man for the sheer thrill of doing so. He is later introduced to a team of three highly skilled criminals consisting of expert robber Michael De Santa, ambitious gangster Franklin Clinton, and the violent and unstable redneck drug lord Trevor Philips. He uses the three to steal several high end and rare cars around the city of Los Santos as well as using their skills to improve his other business ventures in the city.

Eventually, Weston betrays Michael by attempting to have his family murdered by his personal squad of mercenaries, all due to Weston's personal assistant being killed in an accident caused by Michael. Weston also decides not to pay Franklin and Trevor for the cars they stole for him, despite the personal risk each of them made to acquire them for him. These events create a large enmity between Weston and the three protagonists making him one of their most dangerous enemies along with Agent Haines.

Later in the story, after Michael, Trevor and Franklin pull off their biggest heist yet, Weston pays a visit to Franklin and asks him to murder Michael on his behalf. Weston dismisses Franklin's misgivings about the job, as well as Haines' previous orders for Franklin to kill Trevor Philips. Weston explains that Michael is too much of a threat to his businesses around the city and proceeds to threaten Franklin's life if he does not comply with his wishes. Franklin is then left to choose between murdering Michael, Trevor, or risking all their lives to go up against all of their enemies together.

If Franklin chooses to go after all of the team's enemies, he, Michael, and Trevor (with the help of their heist planner and hacker, Lester) set a trap for Haines' corrupt agents and Weston's group of mercenaries. After leading both groups into an abandoned smelting factory, a massive shootout erupts between all parties involved, leaving only the Michael, Trevor, and Franklin's friend Lamar Davis standing. The trio then set out and almost simultaneously dispatch their rivals (Haines, Wei Cheng and Harold "Stretch" Joseph), ending with Weston after he his located at his home by Trevor, with the help of Lester. Trevor proceeds to kill all Weston's personal guards and kidnaps the villainous tycoon by throwing him into the trunk of his own car and driving him to a secluded spot where Franklin and Michael meet him. The three men then push the car, with Weston still in the trunk, over a cliff where it violently crashes into the shore below and kills the evil billionaire.

Alternatively if the player, as Franklin, chooses to kill Michael or Trevor, then Weston's final fate is not shown and it is assumed he survives the events of the game. If the player chooses to kill Trevor, Haines assures Franklin that he will talk to Weston and get him to back down, as the latter is now licking his wounds after Merryweather lost it's license to operate in the US; however, Haines also informs Franklin that his "chips are cashed" and tells him not to contact him again. If the player chooses to kill Michael, Franklin will kill Michael at Weston's behest. After the deed is done, Franklin will call Weston and inform him of this, asking him to ensure that Steve Haines will not come after him for refusing to kill Trevor. Weston informs Franklin that he has already contacted Haines' superiors and ensured that he would back down. Franklin also asks if Weston has any more jobs for him, but the billionaire sardonically tells Franklin that he did do his last job for him, and tells him he isof no further use to him and mockingly telling Franklin to "go to business school, because clown school ain't worked out so good".

It has been confirmed, however, that option C is the canon ending, so Weston is dead.

Weston is considerably pompous, overblown, charismatic, temperamental, and over-the-top. He enjoys constantly reminding the protagonists that he is far wealthier than they and that his affluence allows him to do as he pleases. All the protagonists at some point or another agree that Weston can best be described as a "douchebag," overbearing, prone to showing off and with the irritating habit of pretending that he is their friend, despite his absolute scorn for them.

Weston also seems to have gotten used to being very pampered over time; it is very obvious that it has been a long time since he has not gotten everything he wanted handed to him. It is to the point that it does not even occur to him that anyone would actually stand up to him and when they do, he responds with temper tantrums. This can be seem in the Deathwish ending when he tries to bribe Trevor into freeing him, by using his money and connections, but fails.

Weston is very dependent and vulnerable of his money and connections that he loves so much to brag about; it is using this that he gets Michael to work with him (using his connections in the movie industry to introduce him to Solomon Richards) and he is so confident and imperturbable that Franklin will be more intimidated by him instead of the FIB, when he asks him to kill Michael instead of Trevor in the final mission. However, it is implied by the "Deathwish" ending, that Weston does not have as many connections as he thought, since none of the protagonists ever face repercussions for their role in his death, the police and FIB simply label him as disappeared when his body does not turn up and do not carry out any further investigations and his closest ally, Don Percival, is glad to see him gone so he can buy out his shares on Merryweather at a lower price.

He gives the appearance of living a healthy life and a clear, peaceful mindset by practicing yoga (even having his Life Invader profile picture in a namaste greeting pose) but in reality, he uses this image in a passive and aggressive stance, still looking down at others. Even Molly Schultz, who is the only person in the entire game who genuinely likes Weston, is treated with disdain by him and her death in the mission "Legal Trouble" makes him really angry. But it is clear that he only cared about her because she was a good lawyer and the main reason that he is angry is because Michael "made a fool of him."

Weston, according to Trevor, "fancies himself a liberal" and thus engages in several stereotypical "upper class liberal" activities, such as practicing yoga and drinking fancy lattes.

Weston also has the habit of calling any of the protagonists by the moniker "slick," which he uses alternately to pretend he is their friend or to belittle them, as the situation sees fit.

Devin Weston Holdings is a holding company owned by Weston, with his employees being Senior Vice President Molly Schultz, Chief Investment Officer Ray Navaro and Head of Research being George Rucker. With this company, Weston has major control over various businesses which are: 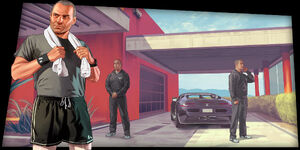 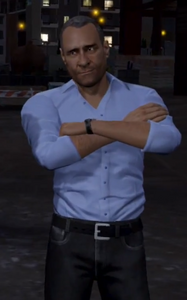 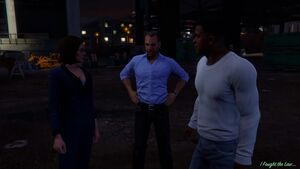 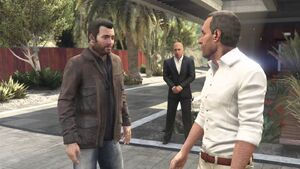 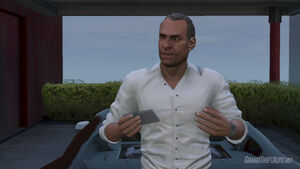 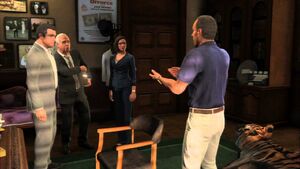 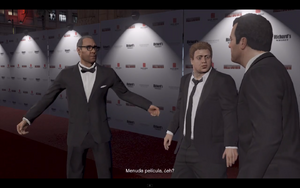 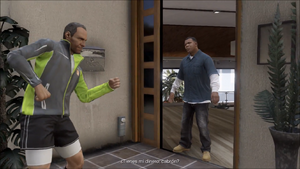 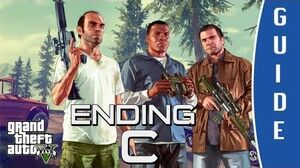 Retrieved from "https://villains.fandom.com/wiki/Devin_Weston?oldid=4141859"
Community content is available under CC-BY-SA unless otherwise noted.