Obtain the Pig Star and use it to conquer Elhorn.

The Devotindos Empire are an army of swine conquerors centered in the Devotindos Kingdom and the main antagonists of Rocket Knight Adventures.

The Devotindos Empire invaded the kingdom of Zebulos searching for the "Key to the Seal", which was needed to unlock the Pig Star. They sent Axel Gear to kidnap Princess Sherry, the daughter of the king, so they could blackmail him into surrendering the key.

The army eventually obtained the key and their emperor, Devligus Devotindos, set off to activate the Pig Star. He was pursued by Sparkster, who managed to defeat both him and Axel Gear and destroy the Pig Star.

This was not the end of the empire, however, as the remnants gathered under the command of General Sweinhart. The pig army initially fought alongside the opossums against the Wolf Army, but after the defeat of the wolf leader, Sweinhart and the Devotindos Army turned against the opossums. 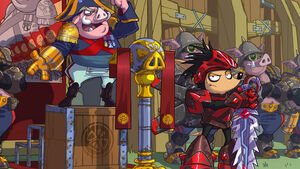 The Devotindos Empire in Rocket Knight (2010) 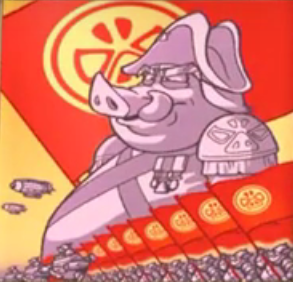 An image from a Devotindos banner 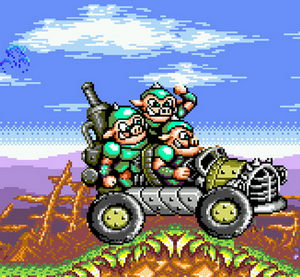 Soldiers of the Devotindos Empire
Add a photo to this gallery

Retrieved from "https://villains.fandom.com/wiki/Devotindos_Empire?oldid=3888893"
Community content is available under CC-BY-SA unless otherwise noted.