Ruling the city of Quetzo.

Take over the city of Quetzo.

Get rid of the air-breathing heroes.

Dexter is the main antagonist of the 1999 Australian animated series Flipper and Lopaka. He is a gigantic, manipulative octopus whose plan is to rule the sunken city of Quetzo after the death of King Dextorian (the ruler of Quetzo when it was a terrestrial palace in ancient times) and get rid of the air-breathing heroes. However, Dexter is eventually very notorious in an attempt to rule the city of Quetzo and trying to stop Lopaka, Flipper, along with his friends Ray, Ottie, and Puffy, and the other residents of Quetzo. Dexter is assisted by the four henchmen to stop Flipper and his friends: three brainless sharks and a green sea snake named Serge.

Like many characters in the show, he was voiced by Keith Scott.

Very devious, fraudulent, and manipulative, Dexter is a notorious octopus who tries to rule the city of Quetzo. One of his most despicable plans is when he tries to get rid of the citizens of Quetzo with many of his diabolical and cruel plans. However, his sister, Dolores, dislikes him when Dexter is being very legendary, opprobrious, and disreputable. However, he always fails when Flipper and Lopaka foil his plans and is eventually defeated.

Several examples of Dexter and his villainous plans have been notable examples.

Dexter is a gigantic purple octopus with light blue spots, lavender lips, and yellow eyes. Like all octopuses, Dexter has eight tentacles. 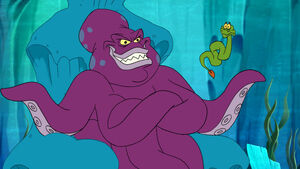 Dexter and Serge.
Add a photo to this gallery

Retrieved from "https://villains.fandom.com/wiki/Dexter_(Flipper_and_Lopaka)?oldid=3917082"
Community content is available under CC-BY-SA unless otherwise noted.