Hypnotizing kids into doing his meager works.
Tending to his pet Garudas.

Build an empire of magic in European continent (formerly, abandoned).

Dhaiva (दैव in Sanskrit) is the secondary antagonist of the Falcon of the Millenium Empire Arc of Berserk. He is an old mage hailing from Kushan Empire who helped Emperor Ganishka to have his ambition realized: to establish an empire of magic. He is a close adviser of Emperor Ganishka, and commander of his Daka and Pishaca forces. It is speculated that he, along with Bakiraka, could become a valuable ally to Guts and his travelling party as the story progresses. Although he made his debut as an evil right-hand/sidekick to a main villain, he begins to display more of his humane side after he encountered Rickert and Erica.

During the story of Berserk Dhaiva is the one who gave the Behelit to Emperor Ganishka in a past encounter, when he was still a wandering sadhu. Since then Dhaiva has served the emperor faithfully and loyally.

Dhaiva is an extremely powerful Kushan sorcerer able to summon mystical creatures such as Kundalini with brief, almost silent, incantations. He has a rank of military commander who is in charge of mages who control Demon Beast Troops of Kushan military. Also utilizing yoga he can float in midair and is also capable of submerging underwater for about half an hour or so. When Ganishka transformed and reborn in a shape he compared with Shiva the Destroyer, while everyone who contacted Ganishka's foggy essence perished Dhaiva survived using solely his own sorcery. Dhaiva's life creation is a Man-Made Behelit that can create astral creatures with pregnant women called Daka. According to Schierke, grandmaster-level sorcerers are capable of flight: Dhaiva is indeed a grandmaster-level sorcerer who can accomplish the said feat.

Dhaiva is also very wise and knowledgeable: he is fully aware of Apostles' natures and secrets regarding how they became that way, imprisoning them knowing Apostles' bodies are connected to the astral world to create his greatest creation: a gigantic artificial Behelit (which is used to create and produce Dakas). Dhaiva, at his first glance, immediately deduced the source of power for Guts and Serpico. As said, Dhaiva's power and wisdom is undeniably immense. Unlike Schierke and her mistress Flora, the two magi who preach mutualism, coexistence and harmony with nature, Dhaiva's deed as creating artificial Behelit and using it to create Demon Beast Troops testify that Dhaiva is a wicked man.

He is first seen in a Kushan vessel, controlling a Makara beast, smoking a water pipe. He uses Hindu mythology references to describe his opponents, describing Guts as "Kshatriya of Durga" (a very loose attempt to coin a phrase for "Warrior of Rage" as Kshatriya is the term that was used to denote the class of Warriors in Indian society and Durga is the "Goddess of Noble Rage") and Serpico as "Vaayu Kshatriya" (Vaayu = Sanskrit term for wind) Under the order of Ganishka, he dispatches his Demon Beast Troops into the outskirts of Vritannis to throw the Holy See Alliance into a great chaos. Amidst the chaos and slaughter, Dhaiva encounters Guts' party. Dhaiva pays special attention to Guts who slaughtered Makara creatures (each Makara is said to be capable of annihilating ten warships) under the influence of the Berserker Armor. Fascinated, Dhaiva challenges berserk Guts to a duel. As the duel commences, the sorcerer summons large tornadoes without citing long spells, surprising Schierke (later it is revealed that Kundalini created tornadoes for Dhaiva, as the creature was controlled by Dhaiva).

He shows extensive worry and care towards the crazed emperor after he takes the form of Shiva in an attempt to reach him, which ultimately fails as Emperor Ganishka is killed by Femto and Skull Knight, causing the world to become engulfed in light. He was last seen floating around his Emperor just before he was engulfed in the light. During the final battle between Ganishka, his monsters and apostles led by Griffith Dhaiva, much to his shock, witnessed apostles and humans fought against his former emperor side by side.

After the emergence of Falconia and Ganishka's defeat and demise which created the new world Fantasia, Dhaiva kept a low profile by setting himself as a stable worker, using his beast controlling powers. He met the likes of former prostitute Luca and her band of young prostitutes, Rickert and Erica (who kindly fitted him with a leg brace as he is too old) during that time. Dhaiva also encountered members of Bakiraka assassins led by Silat and both sides recognized one another. But his time in Falconia was cut short by Rakshas' attempt on Rickert's life. Dhaiva then saved Erica from the apostle and after being accepted into Rickert's travelling party the sorcerer called forth Garudas he kept at the stables, effectively using them to flee alongside the Tapasa, Rickert and Erica. Before he left, he threw a small bag of diamonds to Luca and her hookers as a token of gratitude for looking after him. 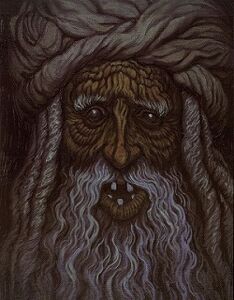 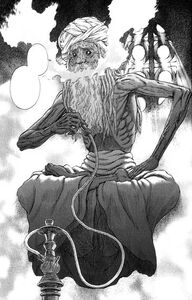