The Dholes are antagonists in Rudyard Kipling's The Second Jungle Book, and recurring antagonists in the 1989 anime series Jungle Book: Shonen Mowgli. They are a pack of marauding red dogs who hunt for sport and pose as a major threat to the Seeonee jungle.

They were voiced by Mark Hellman in Jungle Book: Shonen Mowgli, and Jim Cummings in Jungle Cubs, including the pack leader.

The Dholes first appear in Baloo's flashback where his mother gets caught in a trap known as the "Cold Fang". His mother tries to fend them off but gets killed, along with Baloo's brother.

They also appear in Fargas' flashback where he gets attacked by them but gets saved by Alexander, Mowgli's adoptive wolf father. They were seen sleeping and already settled in their new territory as Mowgli was sent to check them out in the twelfth episode '"Adventurous Journey", Mowgli first encounters a few when they enter Rahhar's campsite where he is. They drive them off by making noise via banging on pots and pans, before Mowgli's pack come to the rescue with Baloo and Bagheera. They later appear as supporting characters in the twenty-seconnd episode "The Waterfront Truce".

In the forty-first episode, Mowgli gets rid of a larger number of them driven into the jungle by drought by luring them to a beehive and they're chased off by the swarm of bees. To escape them, they jump into a river, then when they swim their way out of it, they're mauled to death by the wolves.

They only appear in the thirteenth episode of the series.

They only appear in the sixth episode of the series. In the episode, the cubs drive the dholes out of the jungle by themselves; with the dogs attempting to attack Khan in the temple where the cubs hung out. Bagheera, Kaa, Hathi, and Louie lure the dholes into a chase, each one hiding after a certain distance to allow another to take over, culminating in Baloo tricking them into falling into a gorge filled with bees. 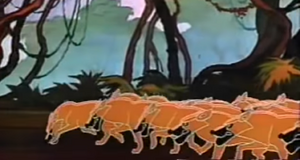 The Dholes in Adventures of Mowgli. 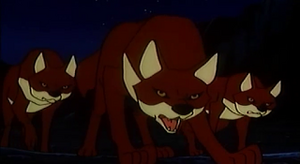 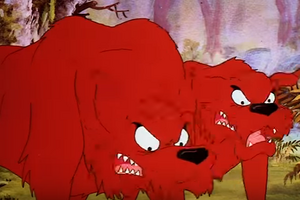 The Dholes in Simba the King Lion. 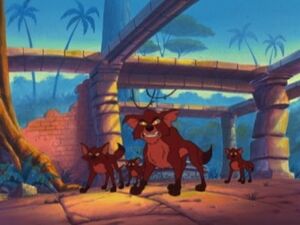 The Dholes in Jungle Cubs.
Add a photo to this gallery 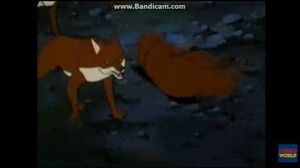 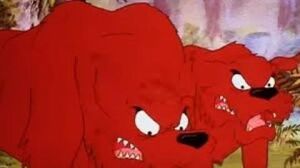 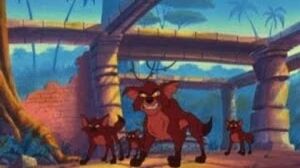 Retrieved from "https://villains.fandom.com/wiki/Dholes?oldid=4179418"
Community content is available under CC-BY-SA unless otherwise noted.