Showing off how rich and "cool" he is.
Saying "ya fool".
Inventing things.

Become the richest and smartest man on Earth.

Di Lung is a minor antagonist in the Cartoon Network series Courage the Cowardly Dog. He is a supremely stuck-up Chinese-American hipster (not to mention a spoiled "nouveau riche" brat) who drives what appears to be a red 1950's Corvette (when he isn't busy foolishly wrecking said car, at least).

He usually says "Watch where you're going, ya fool!" or "Ha ha ha ha ha ha ha! A ha ha ha ha ha ha ha!". His aunt appeared in the episode "Squatting Tiger, Hidden Dog". He also made a robotic Courage in the episode "Courage vs. Mecha-Courage". He is extremely over-confident and often downright ego-maniacal about how talented he is, to the point where he most likely quite literally considers himself to be "perfect." His appearances are usually (very) random and short, and he is likely an in-joke (partially) based on someone that the show's creators met on a chance encounter.

In the episode "Squatting Tiger, Hidden Dog", Di Lung once had an aunt in his family who was a wicked sorceress that took over present-day China; with the help of said aunt, Di Lung lived out his joyous days of living in luxury and even performing "de-boning" rituals that left said aunt's victims boneless while using the stolen bones of said victims in some sort of magic spell to not only maintain said aunt's tyrannical rule over China, but also allow said aunt to keep her magical powers and maintain their full strength forever.

He was voiced by Tim Chi Ly, one of the show's main design supervisors.

Di Lung is a young man of rather distinctly Asian descent. He has somewhat scruffy black hair and wears black sunglasses. He is most commonly seen wearing a white V-neck T-shirt, navy blue shorts, and pink sandals with flowers on them. However, he has also worn a "#1" T-shirt (not to mention green sneakers) in "Squatting Tiger, Hidden Dog", along with a thick black jacket (not to mention blue jeans and black shoes) in "Courage In The Big Stinkin' City", a yellow shirt (not to mention blue jeans and black shoes) in "Hothead", red swimming trunks (and nothing else except for his sandals and sunglasses) in "Scuba Scuba Doo", and his bicycling gear (complete with thick navy-green shorts) in "Le Quack Balloon". He is most likely modeled after Tim Chi Ly (his voice actor). He also is revealed to rather bizarrely have completely yellow eyes (and brown hair, implying that his usual "black" hair color is actually just the result of hair dye and/or something similar) when Eustace blows his car up with him still in it in "Hothead".

Di Lung is actually shockingly intelligent IQ-wise but has a rather insufferably egotistical, pretentious and childish personality. He constantly belittles others in order to make himself feel superior to them and clearly loves to show off with his incredible inventions. He also has a more sadistic side, delighting in watching Mecha Courage beat down his original counterpart (not to mention kicking said original counterpart into a digestive manhole in "Cabaret Courage").

He and his twin aunts, the Good Empress and the Evil Empress, appear in the episode "Squatting Tiger, Hidden Dog".

He makes a minor appearance in "Courage in the Big Stinkin' City," where he bumps into Eustace on the sidewalk. This makes Eustace drop his hot-dog (much to said farmer's dismay), even though Eustace had been standing still and Di had walked right into him (to which Eustace exclaims "Watch where you're going, ya fool!").

He rather surprisingly is the main villain of "Courage The Fly", where he uses Courage as a test subject for his "buffalo transformation" potion (which, of course, ends up accidentally transforming said dog into a fly instead) in order to prevent Courage from being able to stop him from "making a satellite fall (onto Courage's house), ya fool" using his giant satellite-attracting magnet. Luckily, said plan is only partially successful; the satellite does, in fact, crash, but not on top of Courage's house...instead, it simply burrows its way into the ground beneath Courage's house before then flying straight up THROUGH said house and thankfully taking Eustace with itself before said farmer can get an opportunity to swat "Fly Courage" to death using his fly swatter. Shockingly enough, "ya fool" is uttered several times in this episode, but "watch where you're going" is absent from it, making this episode Di Lung's only WWYGYF-free appearance in the entire series.

He also made a robotic version of Courage known as "Mecha Courage" in "Courage vs. Mecha-Courage". He is absurdly over-confident about how talented he is, to the point where he (or at least Courage's hallucination of him) even quite literally calls himself "perfect" in the show's extremely iconic (final) episode of the same name.

In "Campsite of Terror", Di Lung is shown to be quite wealthy, possibly because his aunt is the Empress of China, so said wealth presumably funds his scientific inventions. He also had a TV show where he very condescendingly coaxed people into giving him their wallets, checkbooks, and credit cards; he implied that said act would make said givers rich, but it was really just an elaborate scheme to make him (even) richer.

Lastly, he was revealed to be a downright ludicrously talented former student of the Perfectionist in the aforementioned "Perfect", being able to build an exact representation of the Eiffel Tower out of toothpicks...although it's heavily implied that said Perfectionist was merely a figment of Courage's imagination, so this is most likely not true. 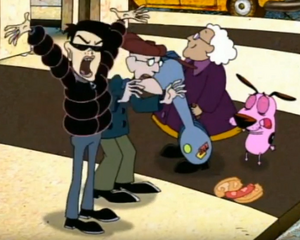 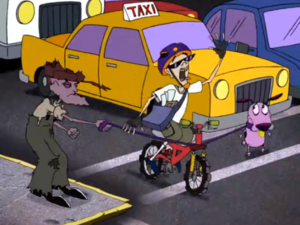 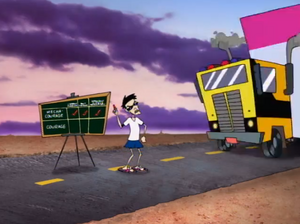 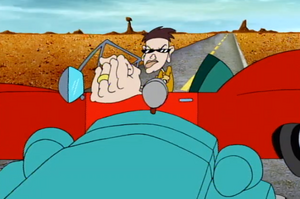