Release and Battle with the Rangers

Final Battle with the Rangers

Despite being a diabolical villain, Diabolico cares deeply for his comrades, especially Loki. When he was forced to shoot Loki and destroyed him along with the rangers, he ultimately defects from Queen Bansheera's side and ultimately became a short-lived and impermanent ally of the rangers. In the season finale, he was able to exact his revenge, helping the rangers destroy Queen Bansheera once and for all.

Diabolico is evidently considered to be a good friend by Loki and Vypra as well as they both mourned him when he was killed by the rangers. Even though he lied to Ryan to manipulate him, he did seem to care about Ryan and wanted him to rule by his side when the rangers were destroyed. He even refers to him as Ryan during his their time together. When Ryan solidify his loyalty to the rangers over him, he stops calling Ryan by his name and simply called him the Titanium Ranger. 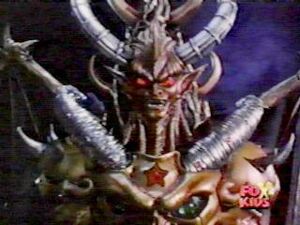 Retrieved from "https://villains.fandom.com/wiki/Diabolico?oldid=2785653"
Community content is available under CC-BY-SA unless otherwise noted.