Diabound is a recurring antagonist during the "Millenium World" arc of Yu-Gi-Oh!. It was Thief King Bakura's ka, created by the spirits of the slaughtered town of Kul Elna desiring revenge and it had the power to absorb the abilities of other ka it defeated. Its form evolved as its powers grew.

Priest Seto was unable to seal it in the original stone tablet because it was originally sealed beneath the chamber in the village. How Diabound came to be sealed in stone is unknown. However, if the existing Diabound is destroyed, the tablet itself that has the image of this monster is destroyed along with it.

After the Kul Elna massacre, Diabound was created by the rage of the village's slaughtered victims. It is unknown how it was sealed in stone and how Bakura first came into contact with this monster; in the manga, it dwells directly within Bakura, and does not have a stone slab.

He fought Atem several times, evolving, and evolving, the more Bakura's hatred grows. He was eventually destroyed at Kul Elna.

Diabound has a half human body with muscular features along with three horns on the back of its head and the second on the front with different angles. It has a tail with the head of a snake at the end of it, as well as four wings, two of each were on his back and two of each were on his lower torso. Diabound can also change its features and appearance making it more fiend and beast-like if Bakura's hatred increases or if the Millennium items are present.

On the stone tablet of "Diabound", it shows an Ouroboros which is an ancient symbol depicting a serpent or dragon biting its own tail. It represents self-reflexivity or cyclicality, especially in the sense of something constantly re-creating itself, the eternal return, and other things perceived as cycles. It can also represent the idea of primordial unity related to something existing in or persisting from the beginning with such force or qualities that it cannot be extinguished. 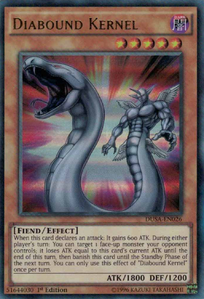