Villains Wiki
Register
Don't have an account?
Sign In
Advertisement
in: One Piece Villains, Anime Villains, Manga Villains,
and 22 more

Hero of the Colosseum

Proprietor of Corrida Colosseum
Prisoner of Impel Down (currently)

Powers of the Hira Hira no Mi

Kill Rebecca.
Kill Kyros in a duel. (all failed)

Diamante (in Japanese: ディアマンテ, Diamante) is an elite executive and leader of Donquixote Pirates' Diamante Army. He is one of the major antagonists in the Dressrosa Arc. He was the one who was responsible for the death of Rebecca's mother, Scarlett.

Diamante is a laid-back man who likes to get praised for his achievements and power. While he enjoys the attention, he usually likes to deny it to some extent like in some of his conversations with Donquixote Doflamingo. Diamante is also very arrogant and thinks that he can hold his own in his battle against Rebecca, Jesus Burgess, and Lucy.

During his fight with Kyros, he proclaimed himself as the only one worthy to holding prominence in the Colosseum since he was up against the undefeated champion. He is shown to be downright sadistic, as he mocks Rebecca for being weak and openly admitting with glee to killing her mother. He also shows this side towards Viola by admitting he killed her sister and to Kyros when he found out that Scarlet was his wife. Despite his arrogance and cruelty, Diamante has shown to care a lot about his crew and his captain, Doflamingo all of whom he saw as his family.

Diamante posses the Hira Hira no Mi which gives him the power to manipulate the density of anything he comes into contact with. With his devil fruit ability, Diamante can make his cape as hard as steel and create ripples in the ground to throw off his target's movement. With his height, size, and stature, Diamante is agile and swift in battle. He is renowned as being an executive officer of the Donquixote Pirates.

In the Corrida Colosseum, the majority of the spectators were optimistic that Diamante would be able to defeat the final contestants in the other Blocks despite their abilities.

He is skilled in swordsmanship, as he was the one who taught Trafalgar Law who is a skilled swordsman himself. The full extent of Diamante's abilities was seen when he matched former unbeatable champion Kyros in combat.

Thirty years ago, Diamante along with his companions Vergo, Trebol, and Pica met Donquixote Doflamingo in North Blue who awakened his ability to use Haoshoku Haki.

After Doflamingo returned from Mariejois once he failed to reacquire his status a world noble with his father's head, he returned to the North Blue where his four friends swore their allegiance to him and follow him in whatever he did. Their loyalty was great as they would kill anyone who hurt their leader and even went as far as burning down a town that built an uneven road that caused Doflamingo to trip. Doflamingo's followers swore to make their leader into the Pirate King.

Years later, Diamante was shown to be an early member of the Donquixote Pirates. He was present on Minion Island where it was revealed that Rosinante and Law had betrayed Doflamingo. Diamante and his comrades beat up the Rosinante (who was eventually executed by Doflamingo) and proceeded to find Law who had the Ope Ope no Mi. They could not have found him in time before the massive battle between the Marines and the pirates broke out.

When the Donquixote Pirates managed to invade Dressrosa and framed King Riku as being a wicked king to his own people, the crew overthrew the Riku family and became the new royalty of the island. It was revealed later that Diamante was responsible for the killing Scarlett, one of the former princess of Dressrosa and Kyros' wife.

Diamante appears in a meeting alongside Trebol and Pica where Doflamingo talks about his plan on how to deal with the Law and Straw Hat alliance. He was informed that the Mera Mera no Mi (Ace's devil fruit) was going to be the thing that lure Monkey D. Luffy into fighting in the Corrida Colosseum. Diamante later reappears where he was in charge of monitoring the Colosseum battles and is shocked at Luffy's ability to use Haoshoku Haki, realizing he underestimated him. He later contacts Dellinger who was prevented from killing Bellamy to go and help guard the toy house.

In the final round, on his captain's orders Diamante took part in the battle for the Mera Mera no Mi in honor of the Donquixote Family. During the final round, he confronted Rebecca and revealed that he was the man who was responsible for killing her mother years ago. As the final battle rages on, the toys changed back into humans as Diamante realizes Trebol failed to protects Sugar. However, this was the least of his worries as Sabo took advantage of the situation and destroyed the arena. Diamante was unable to stop Sabo who managed to steal the Mera Mera no Mi consuming it in the process.

When the war of Dressrosa broke out, Diamante mobilized to the palace where Doflamingo was at with the rest of the crew. He was forgiven for his failure to protect the Mera Mera no Mi by his captain. He waited outside the palace in the sunflower field to confront Rebecca. While attempting to kill her, Diamante was attacked by Kyros who was intent to make sure he didn't kill another one of his family member. Diamante later turned his attention towards Luffy and Law who were planning to dash to the location where Doflamingo was at. He attempted to stop them but was fooled by Law's Ope Ope no Mi technique.

Diamante then battled Kyros who managed to cut his face, irritated he caused the ground to shake and changed his style by swinging his sword like a snake and sending it towards Rebecca. However, Kyros intervened and protected his child. While fighting Kyros, Diamante recognized him as the one legged toy soldier who mourned Scarlett and realized he was the latter's husband and Rebecca's father. He then made many attempts to kill Rebecca and gloats about killing Scarlett.

As the battle continues, Nico Robin jumps in to protect Rebecca from Diamante while supporting Kyros in his battle. In the midst of the battle, Diamante had the upper-hand but Kyros cut him down with his sword which caused him to fall head-first onto a pole marking Scarlett's marked grave knocking him unconscious.

After his defeat, he is detained by the Marines along with the other members of the Donquixote Pirates, excluding Baby 5 and Bellamy, and is escorted to Impel Down. 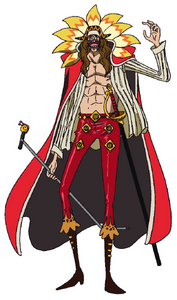 Diamante's concept art from the anime. 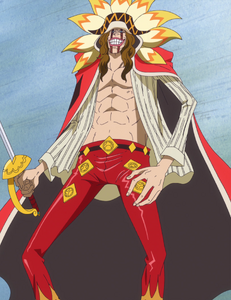 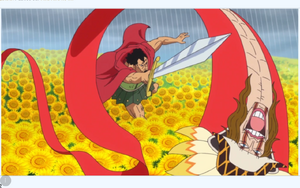 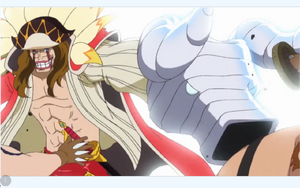