Diane is a major antagonist in Vampire Night. She is a mermaid who fell in love with Count Auguste, she becomes the most loyal servant and will do anything to please her master and partners with Bathe'lemy, Guillaume and Raoul.

Diane and her family have always been persecuted by humans due to their mermaid lineage, causing her to hatred towards humanity. One day, she met a vampire named Count Auguste, as both shared sorrows and understanding how the human race views them. Diane starts to develop feelings for the count vampire, so she decided to follow him by becoming a full vampire, fully aware that no light would shine upon their path.

After Michael and Albert arrived at the village, Diane and other vampires observed the hunters' progress. When the vampire hunters were defeating Bathe'lemy, Guillaume and Raoul, Diane sends her minions after the vampire hunters, while using her illusions to warn the hunters to retreat. But the hunters ignored the former mermaid and headed to Diane's chamber and fought her. After the battle against the her second form, her lair is falling and slowly going down, in her final moments, she speaks with Caroline and agrees with Caroline's opinion about vampires. She later slowly dies and the protagonists have to drag Caroline out of the lair in order to survive.

In her first form, she can appear in some moments of the level and throw energy spheres made of ice, she is always trying to make the protagonists leave no matter what, as she yells:Just leave at once!, and other quotes.

In her second form, she transforms into a giant mermaid-like vampire. Now she can hide in the water and do a bitting attack, she can summon water tornados that she use as shields, she can also throw ice projectiles at the protagonists. 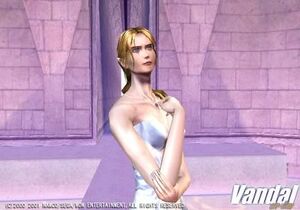 Diane in her first form.
Add a photo to this gallery

Retrieved from "https://villains.fandom.com/wiki/Diane_(Vampire_Nights)?oldid=3349455"
Community content is available under CC-BY-SA unless otherwise noted.