Eliminate people she viewed as competition.

Diane Paine is the main antagonist of the 1984 slasher film Fatal Games, also known as The Killing Touch or Olympic Nightmare. Once a famous Olympic Champion javelin thrower, Diane was disqualified when it was discovered that despite having a sex change, she had too many male hormones. After her career was ended, she began working as a nurse at the Falcon Academy of Athletics.

She is portrayed by Sally Kirkland.

Diane Paine was originally the son of a famous Olympic Champion Javelin thrower who taught him that winning was everything in sports. Wanting to be a champion just like his mother, Diane began training at a young age and eventually did become a champion. However, despite having a sex change, Diane tested positive for too many male hormones and was disqualified from Women's Olympics. With her career over, Diane began working at the Falcon Academy of Athletics as a nurse and would eventually be apart of a program to give the young athletes experimental drugs to win Nationals. Possibly having been a student and apart of the program herself, Diane was very against it, due to the side effects.

It's unknown why, but during the days leading up to Nationals, Diane dresses in a dark tracksuit and begins killing off the test subjects with a javelin. She started by killing Nancy Wilson when she stayed late to lift weights. The next night, while a girl named Sue is relaxing in the sauna, Diane chases her through the school and kills her with a javelin. The next day in the afternoon, a boy named Joe Ward is training with javelins. When he turns his back, Diane throws a javelin and kills him. The head of the project, Dr. Jordine and the teachers all realize that something might be wrong, having thought the kids had just run off before. A girl named Lynn Fox stays behind to work on her swimming, but while she's practicing, Diane dresses in a diving suit and waits underwater. After four rounds, Diane impales her with the javelin.

Now, suspicious that the teachers might have something to do with their classmates' disappearances; Frank, Phil, and Annie make plans to investigate the academy. Frank shows up first and eventually finds everyone's corpses all hidden in lockers in the basement. The killer shows up, chases Frank, and eventually kills him.

Annie investigates the school, but has a run-in with the killer and is stabbed in the side with a javelin. Finding her wounded, her boyfriend, Phil takes her to the nurse. Diane is in the middle of removing her disguise when they come in, but she's behind a divider, so Phil puts Annie on the table while he goes to look for help. Diane comes out and tells Annie to relax, but Annie sees a newspaper about Diane's sex change and realizes that she's the killer. Diane grabs a javelin and chases after her, eventually ending when Diane falls off a lift and is impaled on a flag post. 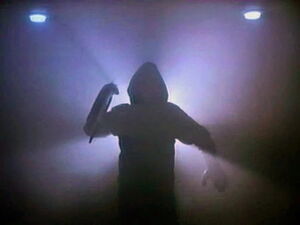 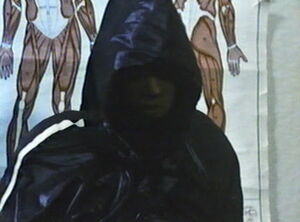 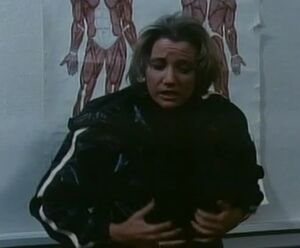 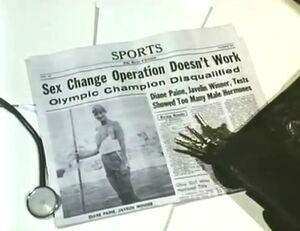 Add a photo to this gallery
Retrieved from "https://villains.fandom.com/wiki/Diane_Paine?oldid=3606491"
Community content is available under CC-BY-SA unless otherwise noted.