Diane Rabe was a rich married woman, but she was also a traditional Jägerbar (a bear like a creature) who encouraged her son, Barry, to partake in their kinds ancient barbaric ritual to mark the coming of age where they would kidnap two humans and hunt them like animals.

Following Barry kidnapping one of the people who broke into the there house for the ritual, Diane talked to the police, unaware this included Nick, who spotting her son woge realized they were Wesen. She was later confronted by the girlfriend of the man her son had kidnapped and held at gunpoint. However, her son rescued her and took the girl to partake in the ritual.

From consulting the books and putting what had happened together, Nick realized they were planning to initiate the ritual. Arriving he told Frank Rabe, who confronted his wife, she refused to help. Together the Grimm and Jägerbar managed to track down the others and save the couple before the creatures murdered them. In full bear form Diane tried to stop them but accidentally fell into her own son's spike pit gravely injuring her. She told him before the police took him away "You have to respect your ancestors.", and was unrepentant about encouraging her son to murder. 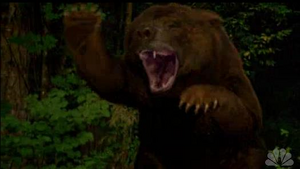 Retrieved from "https://villains.fandom.com/wiki/Diane_Rabe?oldid=2722710"
Community content is available under CC-BY-SA unless otherwise noted.